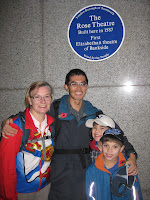 OK, so here's the cool second half of our London adventures at the Globe (see previous post). The other three main theatres of the time were the Rose, the Swan, and the Hope. The Rose was the first of these built on Bankside in 1587, and this was where Shakespeare actually performed, along with Christopher Marlowe, before going to the Globe. Well, the original Rose Theatre was re-discovered in 1989 while digging for an office tower. Now it's an archaeological site where the main portion is underwater to help in preservation, with a small portion of it covered with a stage as an actual theatre. 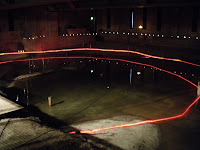 On the right is the archaeological site. The Rose was much smaller than the Globe, with the entire 14-sided theatre being able to fit into the inner open part of the 20-sided Globe. The outer wall and the inner wall are lit up by the neon lights, and the stage itself was really small. Despite the small size, 600 'groundlings' can be jammed into the pit, and about 2,500 total into the theatre. Bear-baiting also took place there, as the volunteers showed us bear bones and teeth found at the dig. 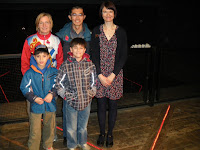 By luck, the Rose theatre company just opened a production of Shakespeare's 'Measure for Measure' on the Friday of our trip (Nov 4). So forget all the musicals going on in London's West End, there was simply no way we were going to pass up the opportunity to watch Shakespeare in his original theatre! The stage and theatre itself is tiny, with room for only about 40 audience, so the actors were right in your face and on your lap at times. Made for a really gripping experience, because it was truly 3D and unfolding right in front of you rather than on a remote stage. One of the barmaids was cozying up to me and making small talk while the scene unfolded, while later the villain Lord Angelo was doing a monologue right in my face (luckily without too much spittle flying) and then grabbing my face for full effect. The actress who played the main heroine, Isabella, is an ex-pat from Vancouver. You can see in the picture how the stage covers part of the original walls. 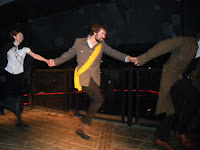 As is traditional in Shakespeare's time, the cast dances a jig at the end of the play to show the audience that nobody actually died and that it was all a lark. Anyway, I have to say that the chance to see Shakespeare at the Rose has probably been the highlight of the entire sabbatical adventures for me to date!