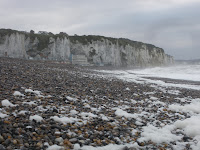 70 years ago today, about 5,000 Canadian soldiers took part in the infamous raid on the northwestern French town of Dieppe. Growing up, I read so much about World War 2, and it was a special dream of mine to visit Dieppe and the site of the invasion. We were fortunate to do so last December during our road trip to commemorate WW1 and 2. 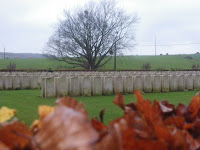 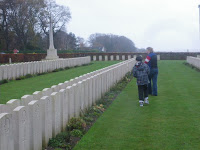 It's a small town and there are no massive monuments like at Vimy Ridge or Ieper, but rather lots of small commemorative plaques and monuments. The Canadian cemetery is a few kilometres inland from the beach itself. I rather like that the beach is largely untouched by ceremony. Standing there on the rough shifting pebbles, battered by the wind and waves, I certainly got a sense of the enormity of trying to survive on that completely exposed beach.

Merci beaucoup. Je me souviens.
Posted by Unknown at 22:13