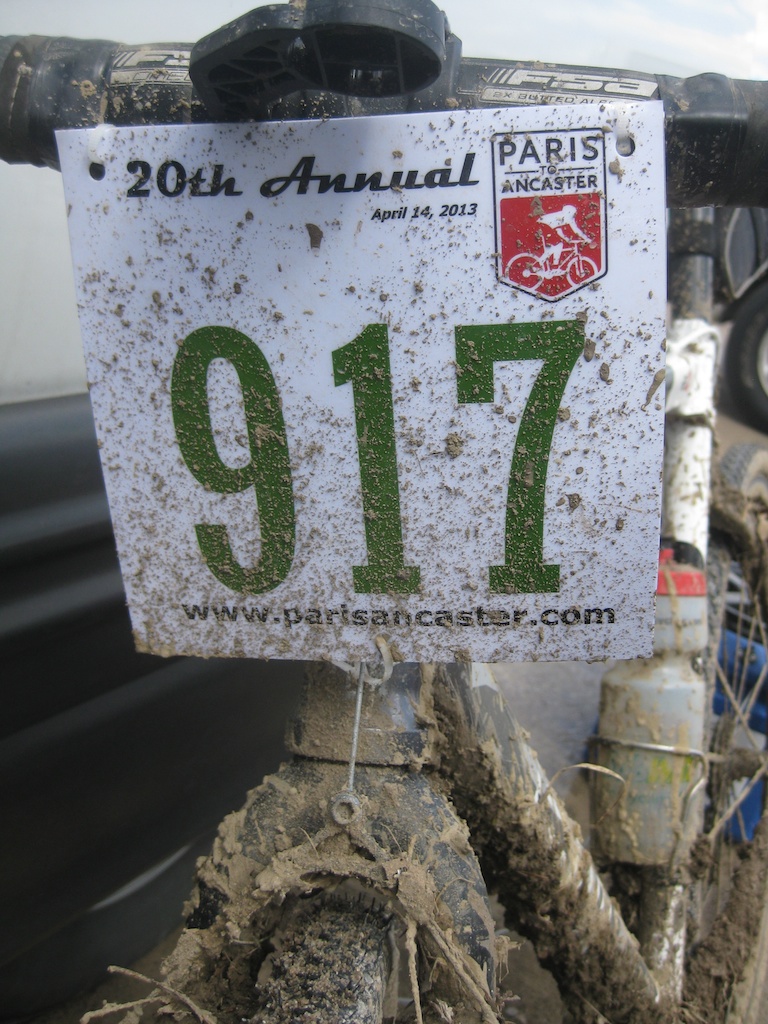 Big anniversary in local bike racing here in Southern Ontario, as this past Sunday April 14th was the 20th running of the Paris-Ancaster ride/race. How to describe it? It's a "not a race" race in that many racers target it; it's not really a mountain bike race nor a road race but you can use either a mountain bike or a cyclocross bike. Oh forget it, why try to figure it out? It's 60 km, run over rail trails, road, singletrack trails, and various huge mud chutes between the towns of Paris and Ancaster. In other words, it's just a muddy blast! 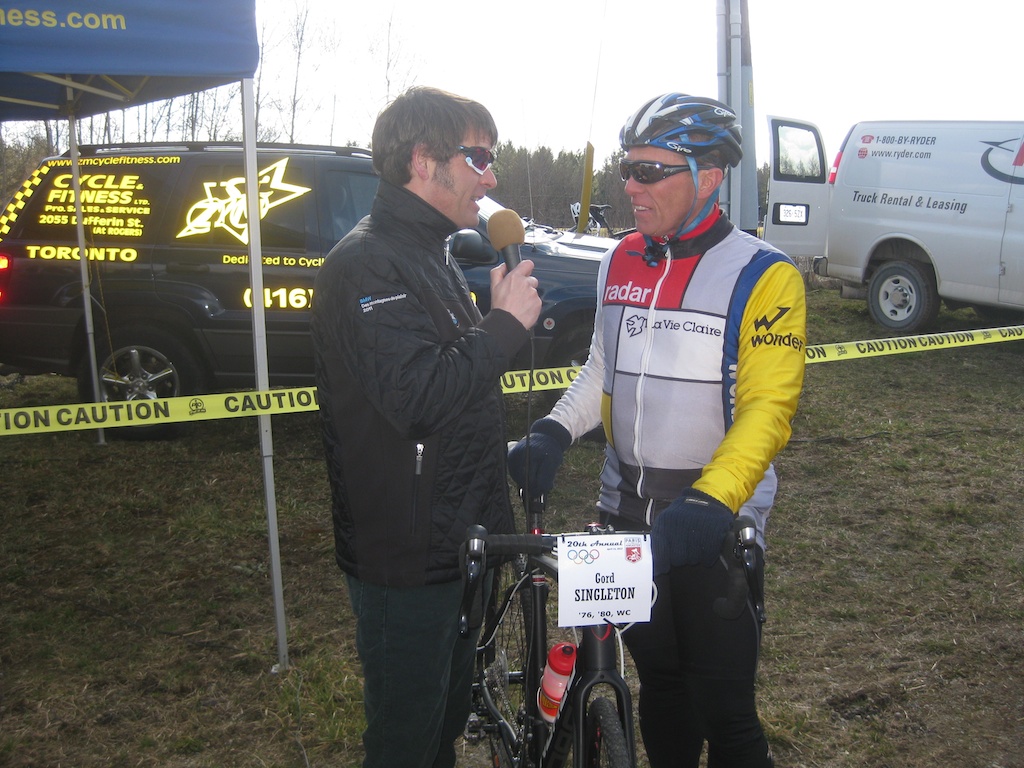 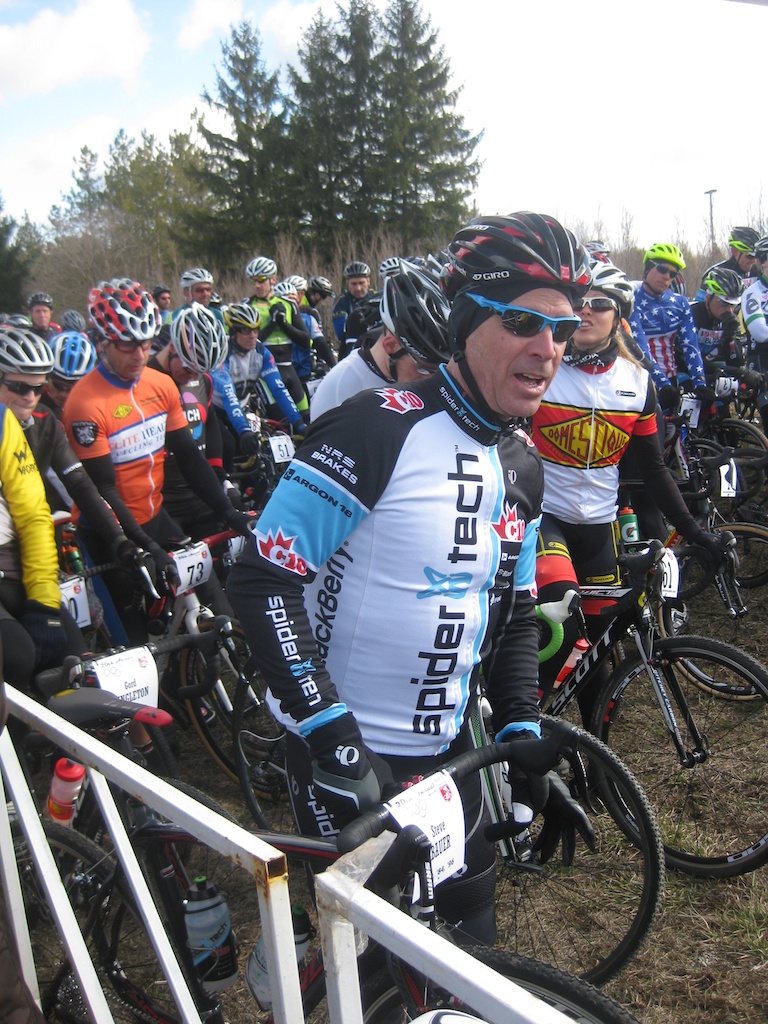 Kudos to Tim Farrar and John Thorpe for organizing this event all these years. It's really well-done, with marshals and police at every corner road or off-road. Being from one town to another also makes the logistics so much harder than a circuit race, not to mention continually maintaining good relationships with all the towns and private land owners to allow us maniacs romping over their land. Thanks guys! 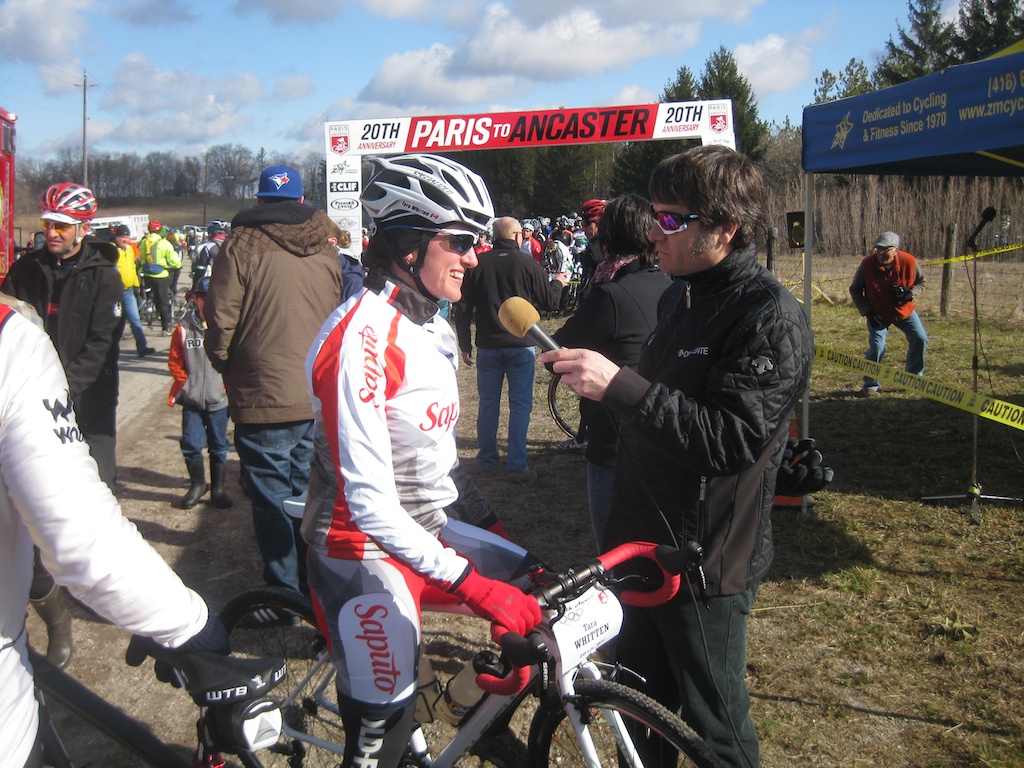 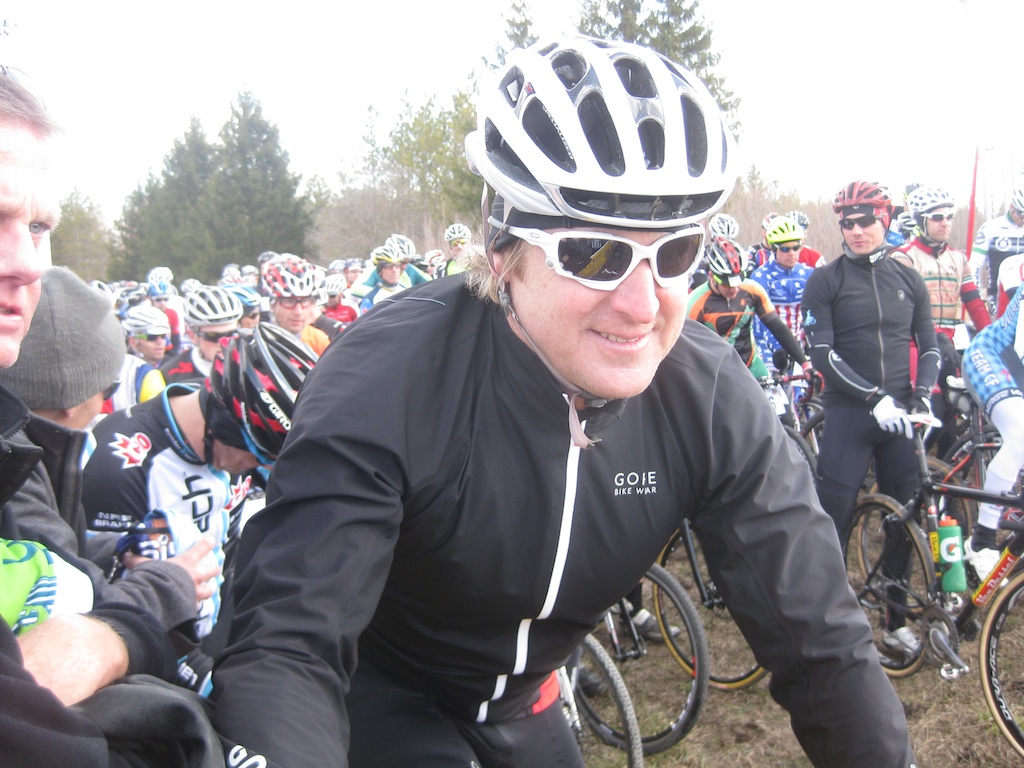 Being a big anniversary, P2A invited lots of big names from Canadian cycling past and present to take part. The first set above there features St. Catharines legends Gord Singleton (World Sprint Champ) and Steve Bauer (legend of legends). Here on the left is World track omnium champ Tara Whitten and on the right Curt Harnett, who set the fastest 200 m record back in 1995 at over 70 km/h! Sue Palmer-Kolmar, Leigh Hobson and other Canuck Olympians also rode. 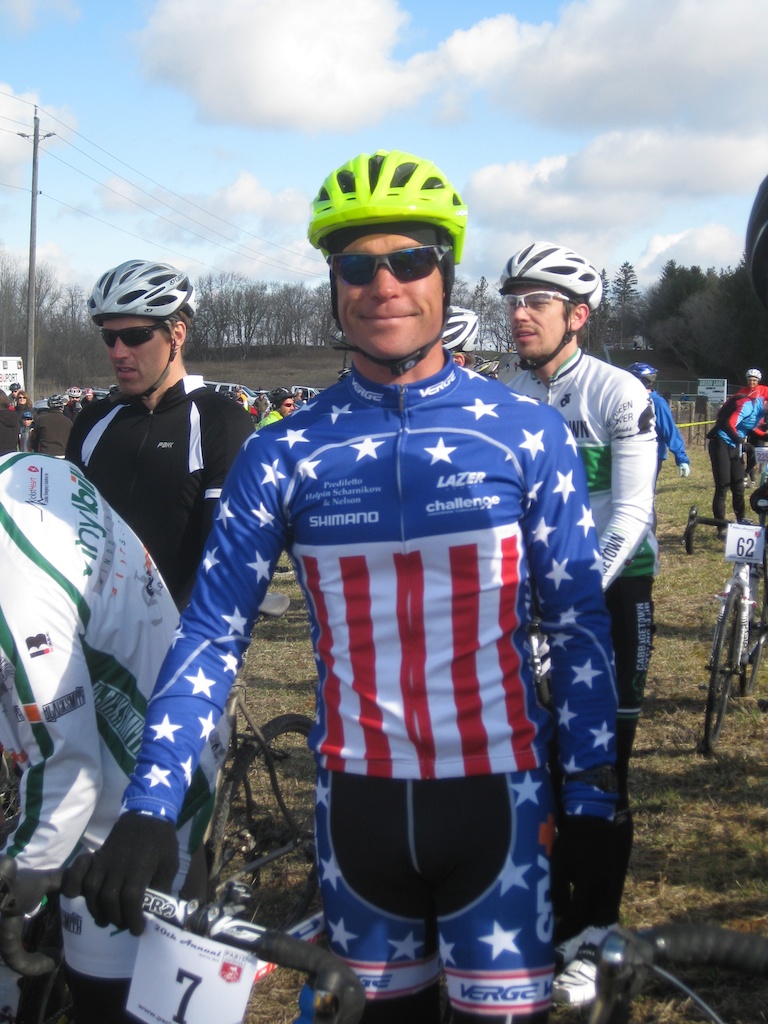 Each year, P2A invites a pretty big name. They've had cross star Helen Wyman and last year they had retired road pro Roger Hammond. This year, it was insanely cool to have American cyclocross legend Jonathan Page. Besides being the current US cyclocrss champ, Page is the only North American male to ever podium at the Worlds, with a silver in 2007. Page also lives and races full-time each winter in Belgium, and we saw him at the CX races we went to in Belgium last winter. 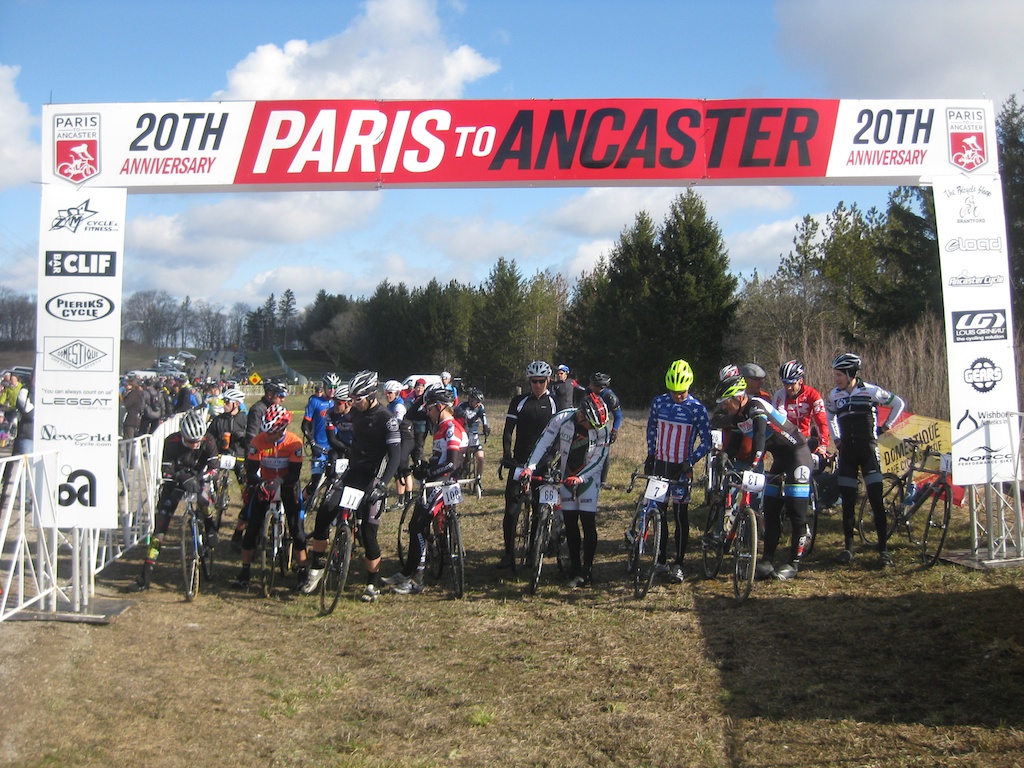 As for me, I had an awesome day - one of those "great days" on the bike where the legs are awesome and everything clicks. Brandon @ Inception Cyclery did a terrific job overhauling my BMC cyclocross bike beforehand, and there wasn't a single missed shift despite the extra 2 kg of gooey mud all over the bike. I got put in wave 2 despite registering for wave 1, and also started at the very back of the about-300 rider wave. However, I managed to move up quite easily in the first 10 km, and actually ended 9th overall in that wave.

There was tons of mud on the course and that made for a really fun day of powering through the troughs. My Michelin Mud 2 tires had amazing traction, and I was able to plow through some big pits at speed. I even managed to "clean" most of the two deep huge downhill mud chutes. The final long hill, I managed to avoid cramping up and passed a stash of riders, sprinting in up the steep finish straight with my granny gear and a final time of 2:22:02 for 242nd (out of 1340) overall, thus hitting my goal of top 250!
Posted by Unknown at 05:00