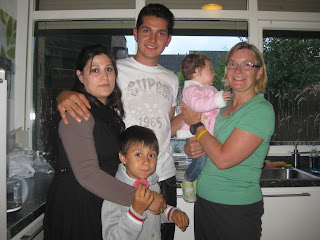 May 6 2013 has been an amazing day for the Cheung clan, one that will certainly be marked on the calendar with big red letters and celebrated. I got the amazing news that I got not one but two scientific papers accepted - never had such a bumper crop of a day before! To top it off, I got another paper accepted two days later, for a total of 5 over the past three weeks!

But MUCH more importantly, we received the greatest email ever. Our Afghan friends Ali and Basyah, along with their children Abufasal and Sadaf, after 4+ years of uncertainty and a sword literally hanging over their heads, received refugee asylum from the Netherlands! Ali converted to Christianity and had a death sentence placed on him by his former mullah, but managed to escape Afghanistan and was smuggled to the Netherlands. We became friends in Amersfoort, where they were at the very end refugee camp prior to deportation with every avenue of claim and appeal pretty much exhausted. Their story is quite incredible and moving, and certainly has been a constant reminder of how fortunate we are to be Canadians.
Posted by Unknown at 13:14