Down Under in Dunedin! 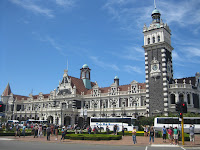 The next phase of the continuing family adventures has me down under in New Zealand with my student Geoff Hartley for the 15th International Conference on Environmental Ergonomics (ICEE) in Queenstown Feb 10-15. ICEE is my "home" conference where many of the scientists I grew up with from graduate days reside, so it really is a family reunion. It's also interesting my life evolving, from being a first-year Ph.D. student in 1994 presenting my M.Sc. project at my first-ever conference, to now being one of the senior members of the field and society.

Above is the railway station in Dunedin (New Edinburgh from the major Scottish settlement to begin the city). This is where the Taeri Gorge Railway journey begins. I took it in 2005 and it's pretty stunning.

We started with a satellite conference in Dunedin at the University of Otago, where I stayed for Feb-March 2005 with Jim Cotter during my first sabbatical. It was a fun few days of deja vu, and also far warmer than I ever recalled Dunnos being! Interesting things so far: