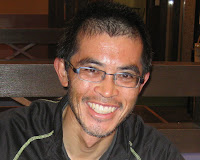 So is this my long-lost twin? I've been riding an enormous wave of popularity everywhere I've been going in Japan the past week, and Nari's been killing himself laughing. Everywhere we've been going, he keeps hearing people whispering "Hey, is that Ichiro?" It started at the symposium at Kobe Design Uni last Thursday, when two of the attending scientists both said independently of each other over dinner that I look just like Ichiro. Funny enough, but then we were at a cafe in Nara prefecture and we hear the same thing. And then checking out of the Sheraton, the doorman told us that people have kept coming up to him asking if Ichiro was back in town and staying here! The same thing has been happening in Tsukuba north of Tokyo, with the restaurant owner the first night thinking Ichiro was in his restaurant!

Oh yeah, who's Ichiro? That'd be Ichiro Suzuki, the biggest baseball star in Japan. With baseball being the #1 sport in this country, that's a big deal, a bit like being in Canada and looking like Gretzky! Ichiro was the first Japanese position player to join Major League Baseball, playing for the Seattle Mariners 2001 until this year when he was traded to the New York Yankees. Ichiro was a huge star for the Kobe team beforehand, which greatly helps my popularity here. Unfortunately, I don't quite have his 5 year, $90 million contract with my CRC!
Posted by Unknown at 23:44