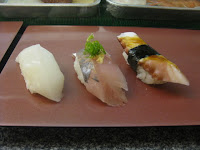 After giving my talk for Nari's undergraduate class today bright and early in the morning, the weather was beautiful and sunny. So we did what academics always should do when such opportunities present itself - we skipped out and had an adventure instead! Namely, we went up into the hills above Kobe via tram, bus, cable car, and train. 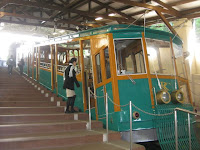 Mt Rokko right above Kobe (it's one of many mountains overlooking the city) is about 950 m elevation. The first stop walking up from the Uni was to the train that takes you pretty much straight up the mountain, 1.7 km of track at 26% grade! It's a "double-weighted" rope car, where there are two train cars on opposite end of the single track that are joined. The only spot where they pass each other has about 50 m of double train tracks - sure hope they have their math right!
From the top of the train at about 750 m elevation, we took the bus to the top of Mt Rokko, where there's a slightly hazy but otherwise very nice view of all around the big bay, from Kobe through to Osaka and beyond. More importantly, we had a nice bowl of hot ramen noodles out on the sunny porch. Afterwards, the cable car took us down to the town of ARIMA (Geoff and Andreas will get a kick out of that!), where we went for a walk through the parks. 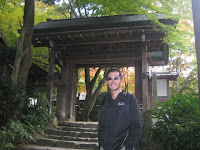 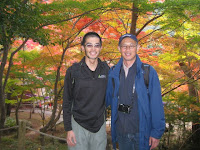 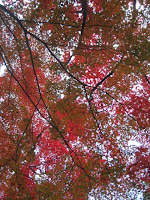 The colours are turning here in Japan, but it's definitely different to Canadian colours. The dominant colour is red and I haven't seen much yellow or orange, and indeed most of the trees are still fully green (of course, it's averaging 15-20oC here! Locals are all bundled up and I'm in my shirtsleeves). The colours are somehow a bit more subdued in intensity, but the light also makes it seem to glow somewhat, so it's quite nice.
While in Arima, we also went to the natural hot springs to get some hands-on hyperthermia going. There's a lot of iron in the water, so we all looked a bit rusty by the end of the long soak. After that, we took the trains back down to downtown Kobe. Interesting note - the trains all have women-only cars to avoid women getting molested in the busy commuter traffic.
And of course, what better way to end the day than sushi?
Posted by Unknown at 23:33