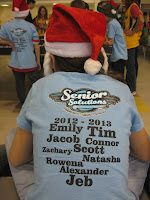 On Saturday we went to our First Lego league regional tournament, this was our first year of being a team, and we came first!! We had lots of fun, we had 4 robot matches and 3 judging sessions (Project, Robot design, and Core Values).  our robot started the day by being very crazy, but we figured it out by the 3rd round,in the third round we got 373 points, which put us in first place until we got bumped to 2nd. we had lots of fun, after all of the real matches were played, there was a little playoff which was just for fun we got to the finals and then lost to the team that beat us in the robot game. There were 15 teams at the competition, and every team got a medal. Since we came first we got the big gold trophy. We were one of five teams to qualify for provincials from this region; the five teams are The Lego da Vincis (us), The Fatima Falcons (the winners of the robot game), St. Alexander Senior Sleuths (also from Fonthill), St. Anns istallions (also from Pelham), and St. Philomena Bulldogs. 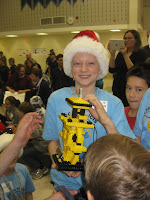 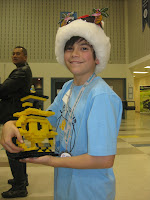 On the left is Scott with the trophy, and on the right was me, The trophy was very breakable, because it wasn't glued together. 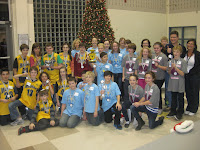 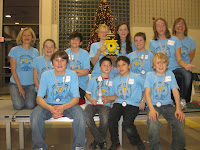 On the left here is a picture of all 3 teams from Pelham, on the left is St. Alexander, in the middle is us and on  the right is the team from St. Anns. In the picture on the right is our team with the trophies.