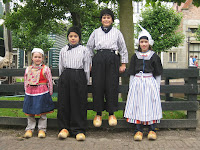 On the 21, we went to the ZuiderZee Museum at Enkhuizen, it was an Open air museum which was on an island. there was a place where you could try on some old types of clothes and also clogs. We went there with Hein and Elly, there was also a cafe where we had something to drink.

After the ZuiderZee museum, we went to a town called Markham,where we had dinner, we had Bacon and Cheese pancakes, and fish soup. We walked around after dinner in the town, and saw a memorial from world war 2. 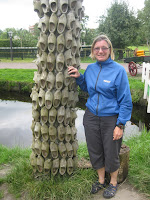 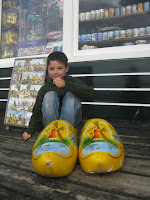 Went to the fishing village of Marken for the evening. It's formerly an island village with very distinct houses built up high together on mounds against the tides. Now there's a causeway to the mainland and lots of tourists, kind of like a Dutch Peggy's Cove. 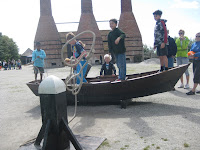 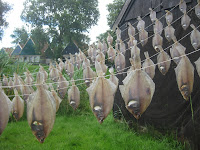 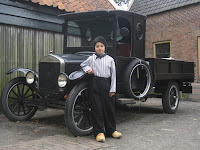 The ZuiderZee Museum was quite neat, and you can even get freshly caught and dried fish and smoked herring there! Jacob with his vintage car on the right. 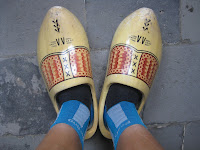 Pez socks and clogs!
Posted by Anonymous at 15:41