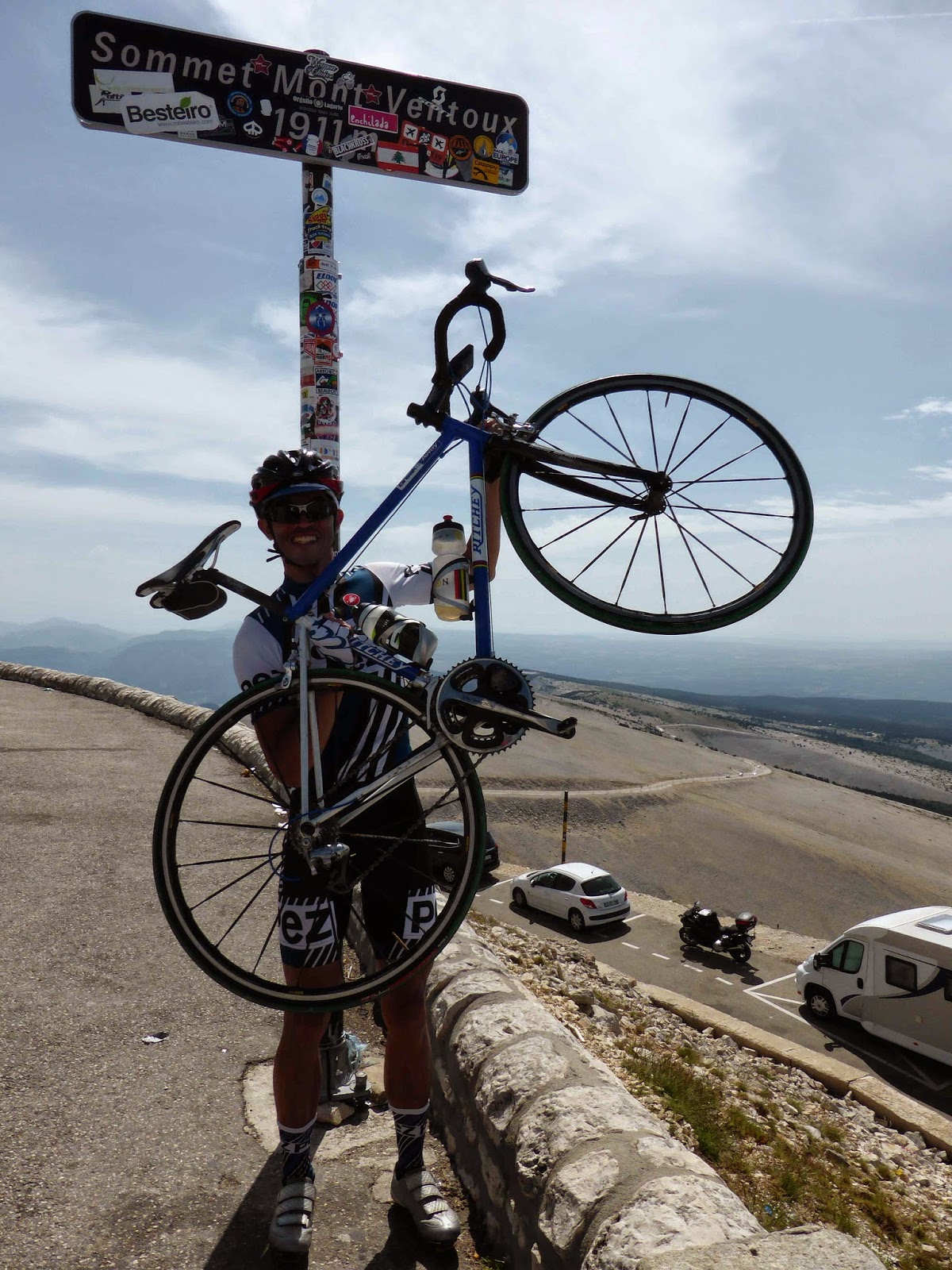 In between Ph.D. defences and my upcoming cycling conference in the UK, I've been hanging out with my friends Eric and Astrid in Bilthoven, especially for Eric's 50th birthday cycling trip that he planned for Provence and the famous Mont Ventoux. 5 other Dutch friends along with Eric and I headed 1200 km south to the base town of Bedoin. Monday June 23 was D-Day, and here are some pics from the climb. 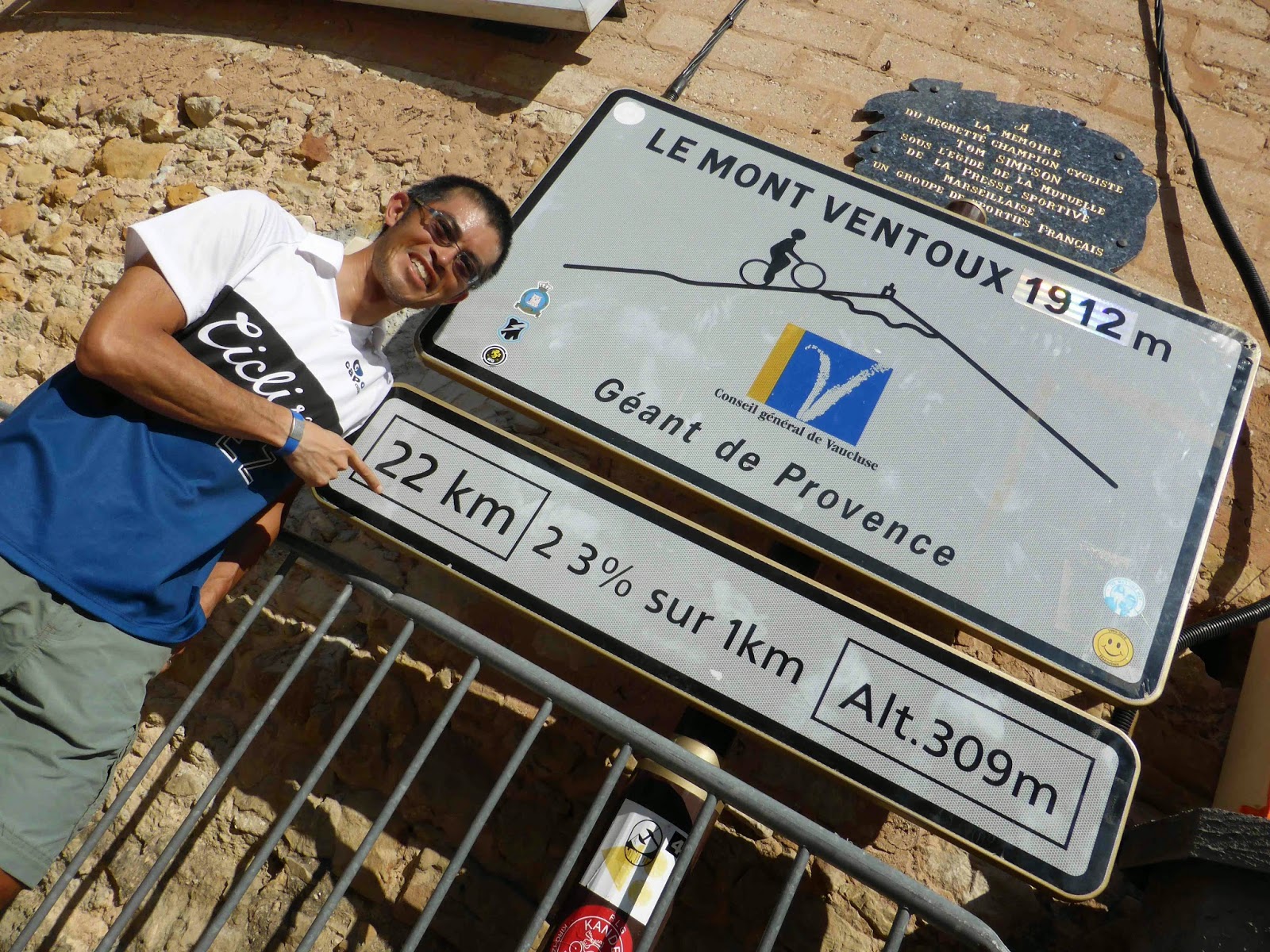 After a gentle 3-5% first 4 km, you hit the forest and it's a relentless 10%+ for about 9 km to Chalet Reynard. From there, it's a moonscape rocky bald top 6 km due to clear-cutting. Strong winds and crazy weather can play havoc up top. 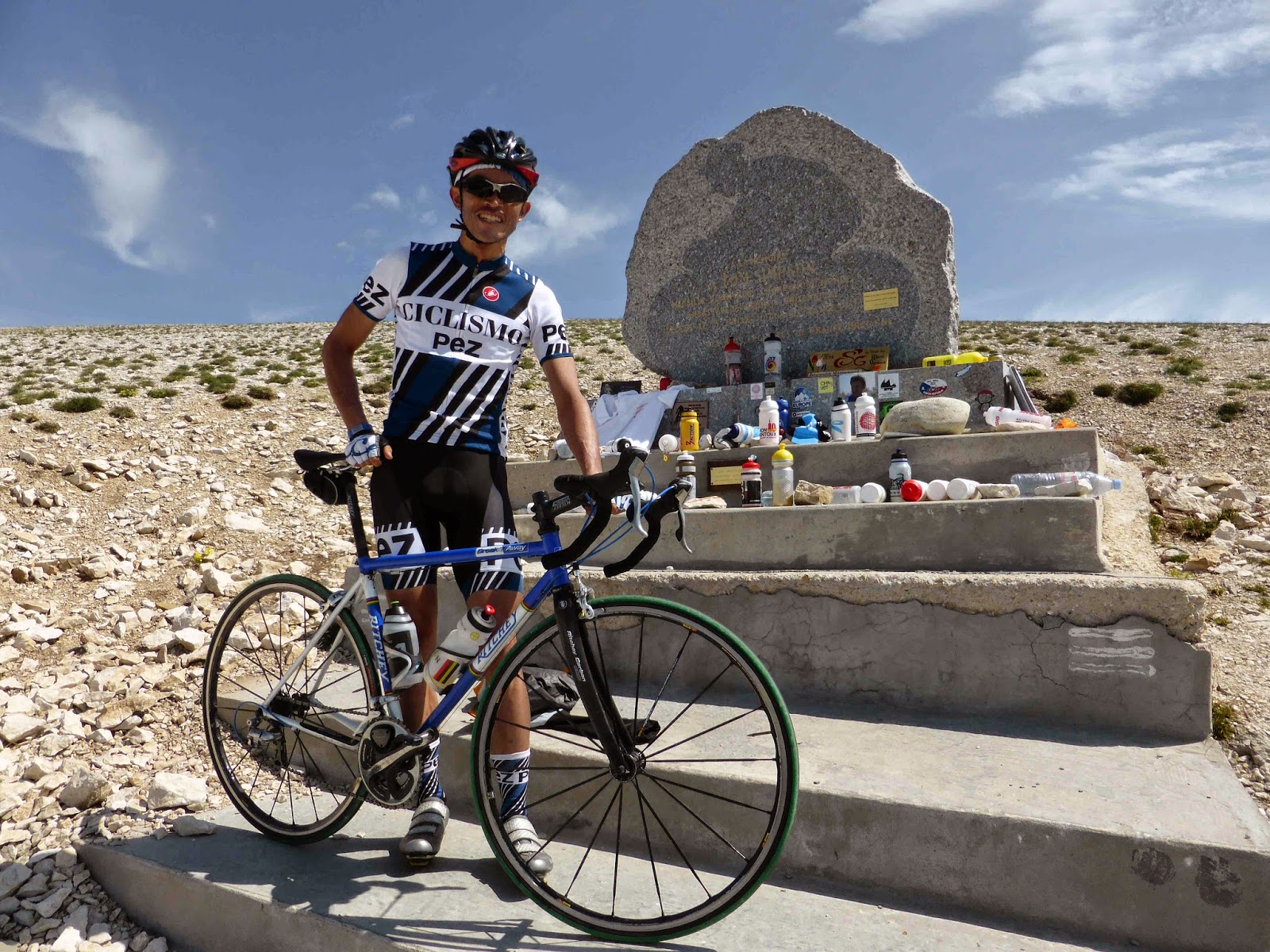 The memorial to British rider Tom Simpson is about 3 km from the summit, and is placed where he collapsed and died during the 1967 Tour from a combo of heat stroke and tons of drugs and alcohol in his system. It's a pilgrimage shrine for cyclists today. 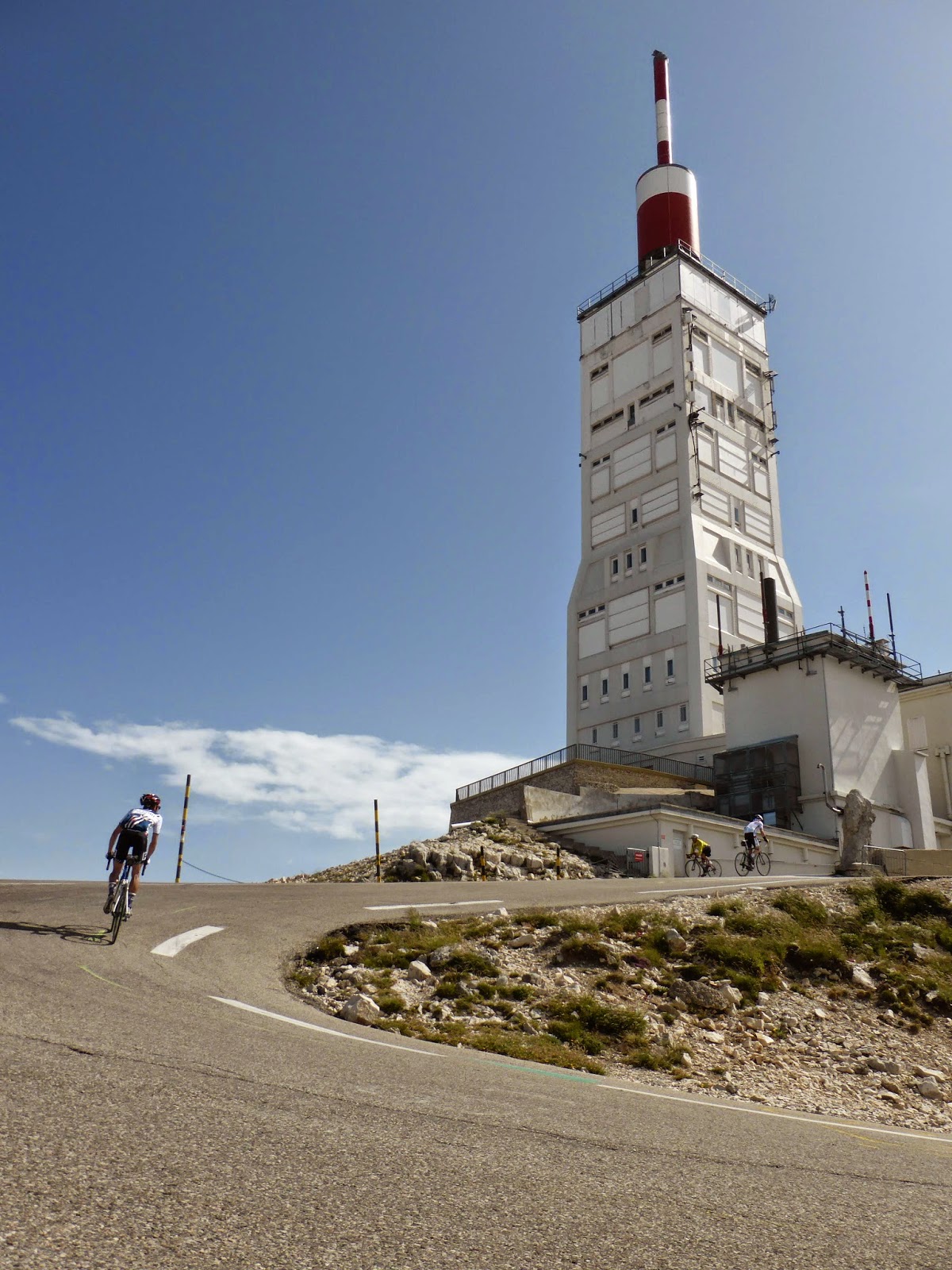 Summit pic that Eric took of me around the final steep switchback. I rather like the composition and my leaning into the switchback.

The tower is enormous, and makes the bald giant even more imposing from every direction. Those of you from Brock, just think how Schmon Tower sticks out from everywhere around St. Catharines and magnify the 100 m Niagara Escarpment by 19 times! 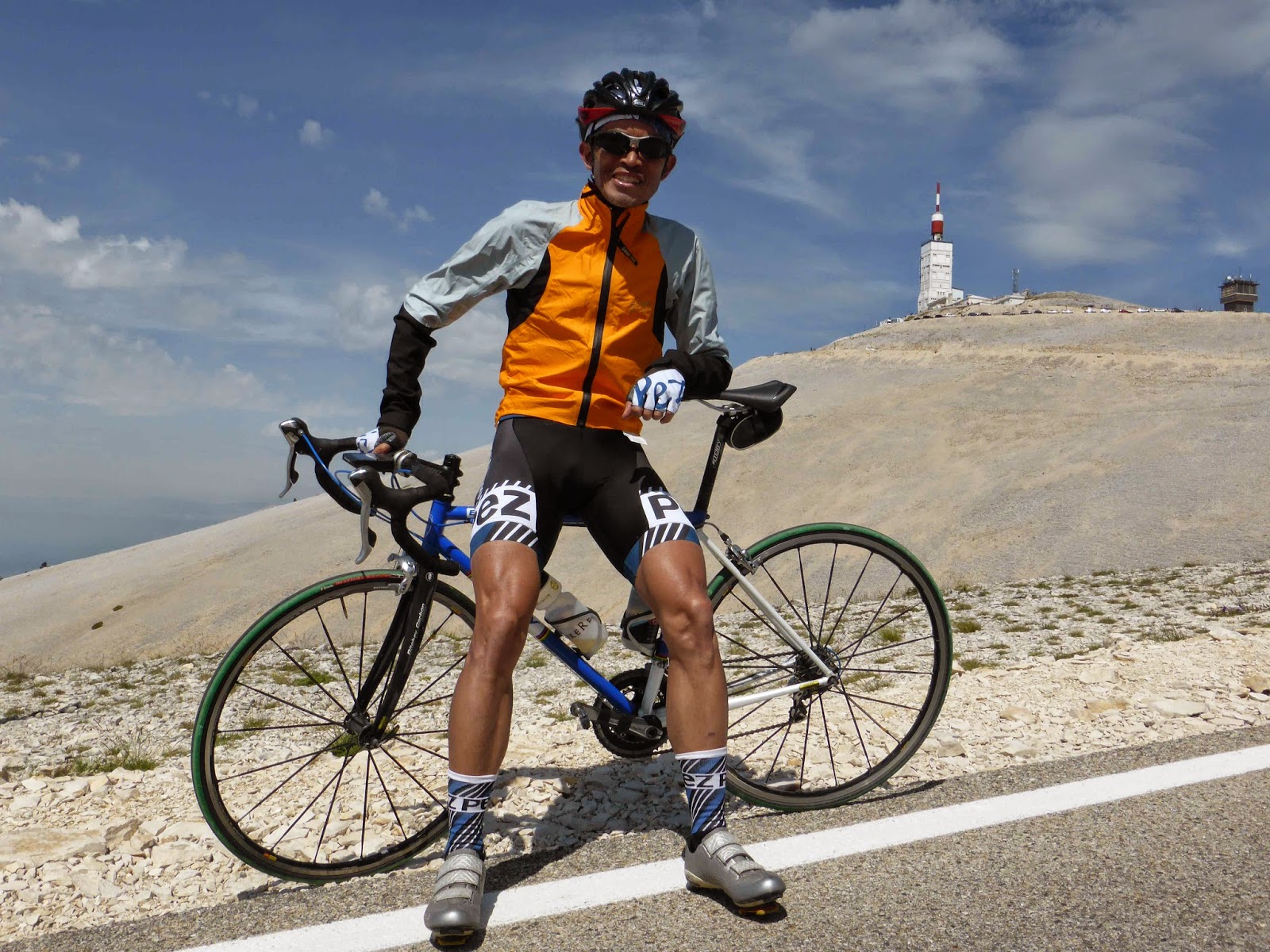 Total climbing time was 1:40 at a pretty comfortable 225W average. But with the howling winds up top combined with the long wait for the rest of the group, not to mention minimal body fat and Asian heritage, I was completely freezing as we started the descent. To the point that I had a pretty wicked case of top tube shimmy the whole way down the first 6 km to Chalet Reynard due to the combination of my shaking and the strong crosswind. Luckily I'm a decent bike handler and managed it by clamping the top tube with my knees along the straightaways.