Killer Trip from Brussels to Trikala 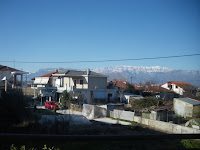 We left Brussels on Monday morning after our 2 ½ month stay there to head to Trikala, Greece. Thanks to Maija Besky for picking us up and driving us to the airport. We left home at 9:00AM and arrived at the airport quickly despite busy traffic time. Clear sailing through check in and security but once we got through security we found out our 12:00 flight had been delayed to 1:00, then 2:00, then 3:00 then 5:00 and finally 7:45. The plane was apparently held up in Strasbourg, France for uncertain reasons. The only consolation was that we were given vouchers for 2 free flights.  Then after boarding, there was a man on the plane who was sick (throwing up sick!) and of course he was seated right in front of us. There was a delay until airport staff came to remove him from the plane and for other staff to come in and clean.

So our 4:30pm Athens arrival turned into a midnight Athens arrival. (The second time we have flown into Athens at midnight this year!). We had planned to try to find a hotel to stay the night and then get the car from Petros’ wife in the morning but of course more complications – wee missed the last airport train of the night which went at midnight and there was a general transit strike scheduled for the next day.  So we decided the best course of action was to take a taxi to get the car and head for Trikala and drive during the night (at least there was little traffic). The taxi took us to almost the right address but not the right street so Stephen had to walk to meet Maria and get the car. I think we finally headed out of Athens at about 2:00am. The 4.5 hour drive to Trikala was quite smooth but when we got there Stephen’s Greek sim card had run out of credit and we couldn’t call Petros to let him know we arrived and Stephen didn’t want to go knocking on unknown apartment doors. Finally about 8AM we met up with Petros and got into the apartment. Despite all that we can be thankful that Zachary and Jacob were incredibly patient and got some sleep on the way. At the airport, we met a young man named Rico from Holland and spent a good amount of time chatting about travel, bicycle design, cycling in general, watches, computers and he loaded up Stephen’s hard drives with some Greek audio lessons and movies. Also, the apartment here is really nice – it is large, new and very homey. It even has 2 large balconies, which the boys liked and it has a view of the Pindos Mountain Range – the peaks are snow covered right now. It is very cold here today (-1C) but hopefully it will warm up soon.
Posted by Debbie at 12:04