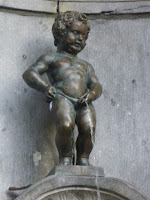 Can you believe that it's pretty much our last week in Brussels and we're only now posting about its most famous resident?

(By Debbie)
I don’t quite understand it but one of the most famous landmarks in Brussels is the Manneken Pis. I think there is scarcely a tourist who comes here who doesn’t make the pilgrimage to find this little boy peeing in a fountain. The fountain has been here since 1618 (it's been stolen a few times and the original is now at the Royal Palace, with the currently replica there since 1965) and the statue is remarkably small (about 61cm). It is surrounded by a little greenery, a wrought iron black fence and security cameras.

Official Brussels City Website for Manneken-Pis
The Manneken Pis is a surprisingly well-dressed statue. He owns over 600 outfits and many of them are on display at the City of Brussels Museum. He can be an astronaut, a cowboy, a hockey player, a policeman and English bobby, a Native American and the list goes on and on. 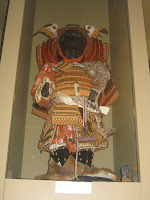 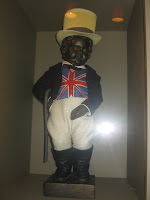 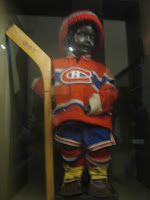 I must admit that we have made a few trips to visit him. When we are in the neighbourhood of Manneken Pis we will wander by to “see what he is wearing today”. We have seen him with no clothes on, as Santa Claus, a baker, with a knitted condom for AIDS awareness day and as a blind person for Louis Braille’s birthday on January 4. Of course, the 1EUR waffles across the street from him couldn’t be contributing to our fascination to the site, could it? 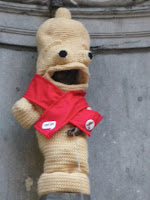 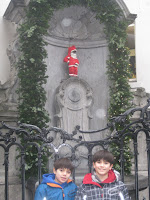 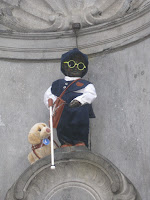 Of much lesser known fame is Manneken’s lesser known female counterpart – Jeaneke Pis. She is much newer, only being built in 1985. She is located at the end of a short dead-end alleyway and there is no sign indicating the way. She is protected by a locked wrought iron fence, doesn’t have a working fountain and isn’t surrounded by the crowds of tourists that Mannekin usually is. Although the day were there, a large guided tour came along just when we were trying to get a picture. There are other Manneken Pis statues in other Belgian towns too. 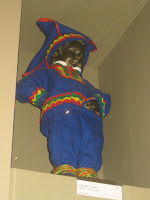 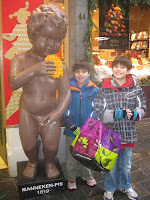 There are lots of stories explaining the history and origins of Manneken Pis but no consensus. Some stories involve a boy peeing on a lit fuse to prevent a big explosion, another about peeing on a fire to save the Royal Palace (that'd be one big bladder!), even about a boy plugging up a leak in a dam with you know what!
Posted by Anonymous at 08:38