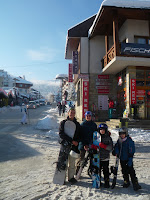 We have just finished 3 days of skiing and snowboarding at Bansko Ski Resort in Bansko, Bulgaria. Bansko is one of the premier ski resorts in Eastern Europe and there were World Cup races here in 2009 and 2011. It was a very fun trip and we had no injuries, except for sore muscles! Bansko is a village about 5 ½ hours from where we are staying in Greece, although it took us about 8 ½ hours to get there through the mountains. We came with Andreas and 2 of his Greek friends and we had 2 apartments in the same building. They were located about 200m from the base of the slope. The village is at about 900m and the main gondola lodge about 1635m. The highest chairlift goes up to 2700m and there are lots of different lifts and runs. 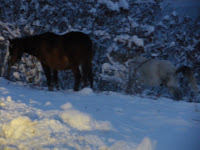 Driving in Greece was fine but once we crossed the border it was a whole new experience. Narrow, winding mountain roads over a mountain pass where we saw horses and cattle loose and grazing on the road/roadside. Stephen and I learned a new winter driving skill – how to put chains onto tires – once we hit the snow in the mountains. We followed Andreas on the drive home and discovered that we had take the scenic route over the mountains to get to Bansko on Thursday. There was a relatively flat highway that we could have followed all the way, thereby eliminating the need to put on the chains and the scary driving in the dark, but then we wouldn’t have seen the cows and horses on the road. 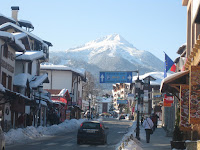 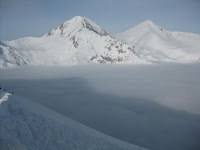 To get to the main ski lodge, you had to take a gondola ride that took about 15 minutes. The view was unbelievable – huge, tall trees and mountain peaks in the distance. Friday was sunny and relatively warm but Saturday, the weather got colder and Sunday, it was even colder and snowing.  I did go up to the top on Friday but wasn’t cold anymore by the time I got down with the increase in heart rate and blood pressure caused by the descent. 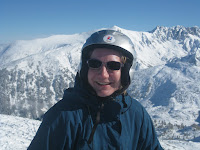 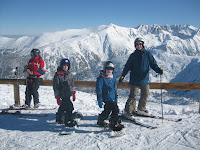 The boys meanwhile had very little trouble on their snowboards and after a few runs getting comfortable they were back to last year’s form. Saturday and Sunday, I had to let them go off with Stephen and find an easy loop that I kept doing until it felt easy and then gradually added more difficulty. The problem is that there are only 3 grades of difficulty and the 5km descent from the top gondola station down to the village gondola station (700m drop) is classed at easy, but so is a run that has a big wall in the middle. 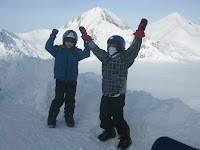 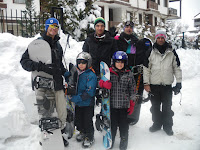 We met people on the chair lifts and gondolas from UK, Rochester NY, Serbia, Turkey, Greece, Israel, Bulgaria, and Russia. The Europeans like to come here because it is cheaper for them than going to the Alps. The food is relatively cheap and the village has lots of tourist shops and restaurants for the evening.  We all got a little sun, so we are looking tanned and fit again. Monday we will drive home and Tuesday, it’s back to school and gymnastics. 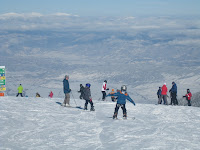 In the meantime, today (Sunday) is the World Championships cyclocross race back in Koksijde, Belgium, so shortly before 1600h local time Stephen and the boys started developing nervous tics due to the fact that the apartment has no internet nor any way to see the race!
Anyways, we are home in Trikala now and the weather here had taken a change in the chillier direction and there are even snowflakes in the air this morning.
Posted by Debbie at 13:17