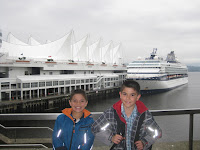 This past Sunday, we went for a trek through downtown Vancouver. Daddy and YeYe ended up doing a Father/Son project of fixing the garage door together, so they and MaMa met us at Kirin restaurant later for dinner. We took the Skytrain to the Waterfront station, at the Canada Place behind us in this picture. This is where the cruise ships dock, and there were two there that day. This is also where the Seabus goes across to North Vancouver, so we took a quick trip over. 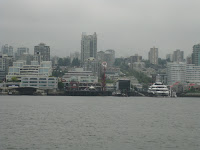 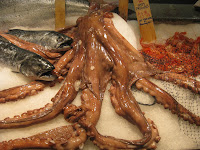 The Seabus goes over to Lonsdale Quay, and it's about a 10-15 min ride across the water. The Quay is now quite developed, with lots of shops. There was a seafood shop there where we found this big octopus. 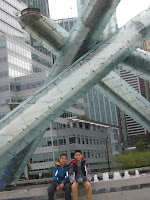 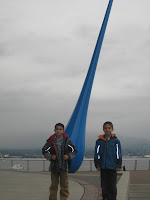 Back on the Vancouver side, on the left picture is the Olympic torch for the 2010 Olympic Winter Games. It has four large pillars coming out of the ground at an angle, with a fountain underneath. The cauldron itself is at the top of the pillars, and flames can also come out of each pillar. Around the pillars are sections of frosted glass. On the right is a big blue drop sculpture along the waterfront near Canada Place. 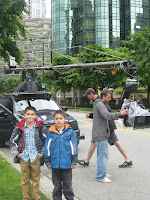 Walking through downtown, we came across a film crew making a Kia car commercial. Behind us in the picture is a Mercedes car with a camera on a big crane. The crane allows the camera to move smoothly along the road or around the car. The camera car and the cranes were painted completely black. I think that is so it doesn't reflect in case it gets into any of the video by mistake. We saw one of the Kia cars with a camera in the front filming itself as it drove along too. 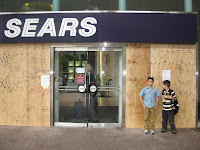 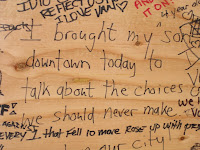 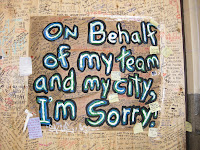 After Game 7 of the Stanley Cup Finals, there was rioting and looting downtown, with lots of of windows broken, cars burnt, and people robbing from stores. The next day, someone came down and wrote out the message on the right, on one of the wooden boards covering the broken windows outside the Hudson's Bay store. After that, thousands of other people started writing notes on the boards too to say sorry and to show the better side of Vancouver. Thousands came and helped in the cleanup too over the next week. 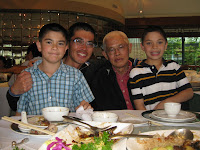 After our big trek, we walked across the Cambie Street bridge to the Kirin restaurant for dinner. We were pretty hungry by then! MaMa, YeYe, and Daddy met us there and we had a nice dinner. We had a roasted chicken, a seafood and vermicelli hot pot, a spicy beef, and a duck with lots of veggies. Daddy and YeYe even got special Father's Day pens from the restaurant.