The Other Canucks Twins! 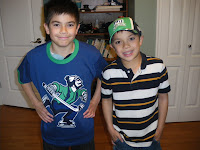 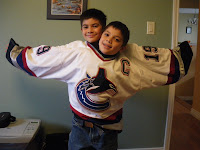 What a game last night for the first game of the Stanley Cup Finals between the Vancouver Canucks and the Boston Bruins! Vancouver is just Canuck-crazy because it's the first time since 1994 being in the Finals. You can't walk two steps without seeing someone wearing Canucks stuff. On the cars there are lots of small Canucks flags, and some trucks even have one or more huge Canucks flags flying out back. All the buses have their numbers and route signs alternate with big "Go Canucks Go" flashing. On the nights of the game, there are lots of people at Rogers Arena and all downtown.

The game itself had lots of power plays. The score was 0-0 until the last 19 s of the game because both Roberto Luongo (Bobby Lu) and the Boston goalie Tim Thomas were making amazing saves. In the last seconds, Kesler stole the puck, passed it to Jannik Hansen (Mr. Speedy who skates super-fast), who then made an amazing pass to Raffi Torres for a terrific goal. We all went crazy after that, and the party in Vancouver probably kept going all through the night. 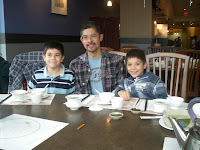 Our Uncle Ken came down yesterday from Calgary to spend the next two weeks here, so we will all be here together through the Finals. Today we went for dim sum and had chopstick battles over squid tentacles. 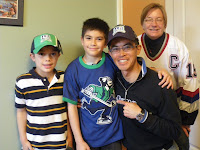 Uncle Ken surprised us with our own Canucks gear. Jacob and Daddy got a Canucks 40th anniversary baseball cap and I got a "Johnny Canuck" tee shirt. That's probably much better than this guy in the newspaper who got a huge "Johnny Canuck" tattoo on his left leg. It took SIX HOURS under the needle to do!
Posted by Anonymous at 05:03