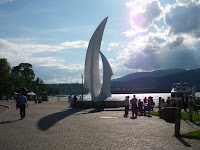 I'm spending a quick trip up in Kelowna to visit with my colleague Dr. Phil Ainslie at University of British Columbia - Okanagan. His research interest is primarily in cerebral blood flow control, both at rest and exercise. We co-supervised a Ph.D. student, Shawnda Morrison, together when both were at University of Otago in Dunedin, New Zealand, but had actually never met until last fall at a conference. We've been talking about ideas on using thermal manipulation to study brain blood flow. 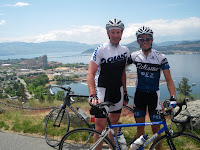 Shockingly, despite growing up in Vancouver, I've never actually visited Kelowna before! As an added bonus, my racing buddy from my Vancouver and Squeaky Wheelers days, Mark Fleming, moved up here in 1996 and this was our first chance to reconnect personally since then. We went for a long and hilly 110 km ride together today (Sunday), catching up after so many years. Here we are halfway up Knox Mountain overlooking Kelowna and Lake Okanagan. 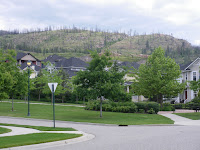 Reminiscent of the Slave Lake, Alberta, forest fires in May of this year, Kelowna was ravaged by heavy forest fires back in 2003, and evidence of this remains easily visible. Here is a view from Mark's neighbourhood showing just how close the fires came. Mark's family was evacuated for 2 weeks while the firefighting was happening, and lots of the area look like this still. 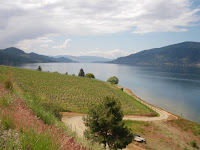 Lots of beautiful vineyard and farm scenery out here. Just like Niagara, only hilly! The other difference is that it's a very dry heat here, to the point where you don't even realize you're getting dehydrated because you're not dripping in sweat. Anyway, speaking of moisture, here's a nice scene of Lake Okanagan north of Kelowna. We had a nice cafe stop right nearby. 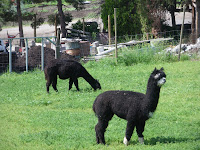 Some of the local residents, looking like a raccoon crossed with a poodle and llama! Mamma Llama wasn't too impressed with our getting too close to the babies. 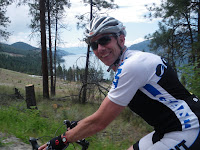 Mark on one of the endless climbs. It was great getting to ride together again! He and Brenda have two girls - Clare is 13 and Lucy 11, and both are very good dancers. We spent the afternoon at his place eating and playing road hockey, and will cheer on the Canucks together tomorrow evening. 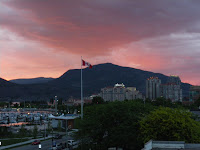 Here's the view from outside my hotel room right now!
Posted by Unknown at 06:12