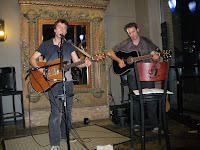 I've had a special treat since my arrival here in Vancouver. My childhood friend Owen Belton (that's him on the left in the picture), who I've known since I first moved to Burnaby in 1978, is a musician and composer. We grew up as neighbours and very close friends. Together with Mike Rashed, the three of us spent many nights playing trivial pursuit and music throughout high school and beyond. We've mostly lost touch the past 15 years or so since I moved to Toronto, but we did see each other a few times on my visits back to Vancouver. The very first Friday we were in town, it turned out Owen's new band, Lost Hombre, was playing at a coffee shop downtown. Therefore, another high school friend Patti, along with Debbie and me, went and surprised him there. This past Saturday, I also went to another gig of his at a coffee shop near Metrotown after the Canucks game. It was really cool to reconnect with an old friend and his music.

Lost Hombre indeed! Check out his video of my favourite songs, "Into the Sunset" and Owen's work at http://www.myspace.com/losthombre - I truly dig the music and think you will too.