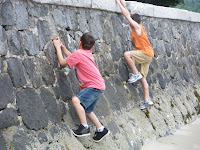 Today we took advantage of the mild weather and weekday by exploring Stanley Park via bicycles. We rented bikes for the boys downtown near the convention centre, then took the terrific city path (part of the Trans Canada Trail) to the world-famous seawall around Stanley Park. It's a perfect place for a family expedition, as the seawall is pretty much pancake flat and well-protected along the entire 10 km path. To the left, the boys are storming the seawall with their climbing skills, even though there are perfectly good stairs 5 feet away. When I was at UBC, one of the famous intramural sports events each spring was "Storm the Wall." 5-member relay teams did a 400 m sprint, 300 m swim, 1 km run, 4 km bike (ME!), then everybody had to get over a 12-foot wall set up in front of the student union building. The event took over the whole campus for two weeks every March, which explained(?) why I missed a lot of lectures! 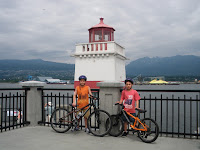 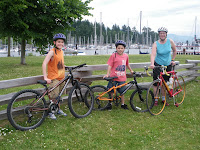 On the left is the lighthouse at Brockton Oval, with the North Shore behind. Our first house in Canada was in North Vancouver, about at the far left of this picture. The entire past seven weeks we've been here, it seems there's been a perpetual dark cloud hanging over the North Shore mountains! On the right we are at the entrance to the seawall, with lots of expensive boats in the background. 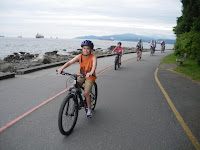 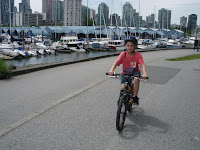 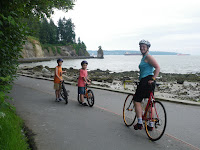 The boys were doing pretty well remembering how to ride a bike, considering they haven't touched a bike in nearly two months. Zachary's first time with a "big" mountain bike with three chainrings up front too. There were lots of people renting bikes, especially tandems. Also lots of rollerbladers too. The seawall is mostly completely separated into a pedestrian path and a bike/blade path, although it can get a bit narrow in parts. Vancouver really does a wonderful job with bike paths and promoting cycling. Every Skytrain station has enclosed bike lockers for rent, and bike paths and corridors run throughout the city. 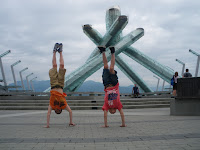 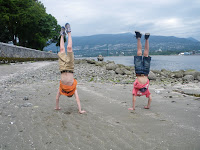 Here are two more for our "Handstands Around the World" collection. The one on the left is at the Olympic Torch in downtown Vancouver, right next to the Convention Centre and Canada Place cruiseship terminals. The North Shore mountains are beyond. On the right we are on the beach, with the "Girl in a Wetsuit" statue between the boys and Lions Gate bridge beyond.