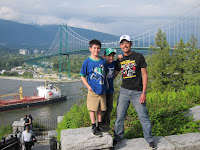 The past 2+ weeks, our Uncle Ken (aka Uncle Crabby) has been out to Vancouver visiting with us. As is tradition, we did a big Lego project together. He brought with him a big Lego 1,800 piece Darth Maul kit. This is our third project together. We've done a full-size Yoda together in Calgary, a Jawa Sandcrawler in Niagara, and now here we are in Vancouver doing Darth Maul. This picture was taken at Stanley Park with Lion's Gate Bridge behind us. Too bad there won't be a Stanley Cup parade through Stanley Park! 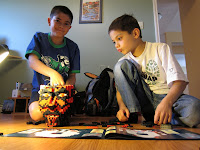 On the left is the front of the instruction manual, which is about 76 pages long! It's of his head and shoulders, and is hollow inside. Daddy keeps saying we should make a jello mould with Darth Maul's skull and eat his jello brain! Our friend Ryan's book says the whole thing weighs about 8-9 pounds! The biggest Lego Star Wars set is actually the Millenium Falcon, with 5,195 pieces and a 311 page instruction manual! 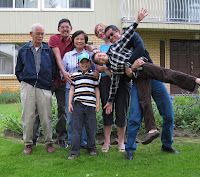 Here's all of us in front of MaMa/YeYe's house before Uncle Ken left for the airport. He and MaMa also came out to watch us at the Circus School, and Daddy borrowed his Canucks jersey for the seventh game. 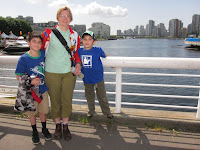 While Daddy was in Kelowna, Uncle Ken and us went sightseeing around Vancouver for a day. On the left is a picture of us in Stanley Park with the "Mermaid in a Wetsuit" statue on the rock behind us. The mermaid has been dressed up with a Canucks jersey. On the right we are in False Creek in downtown Vancouver. This was the site of the Expo 86, which Mommy came out to see and Daddy spent that summer in the army. 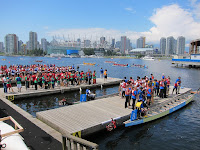 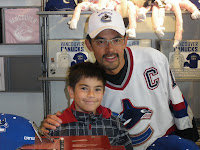 The morning of Game 6, we went down to Roger's Arena to catch the scene and excitement. The Canucks Store was doing great business, with jerseys and other memorabilia flying off the shelves. One cool thing was Canucks USB memory drives, with it looking like a hockey player and the head being the cap that you pull off.

We watched Game 7 at Burnaby Metrotown on the big outdoor screen. It was a fun and peaceful party there, unlike what happened in downtown Vancouver after the Canucks lost.  We were very sad to see the riot happen downtown, and Daddy and Mommy are both furious at the idiots who did the damage and also the people who stood around and watched. However, it has been good to see how the people of Vancouver came together to clean up the mess, find the people responsible, and show that the city is a better place than what we saw last Wednesday night.
Posted by Anonymous at 03:20