Hats Off to the Canucks!

Saturday we had the first truly nice hot and sunny day since our arrival in Vancouver. We spent the day at Burnaby's Hats Off Day festival, where much of the major Hastings Street was closed off for a huge street party. There were vintage car exhibits, and many of the stores and shops had exhibits and demonstrations. There were also lots of food and musicians. 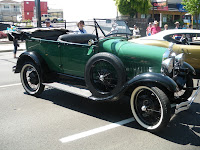 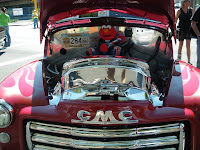 A big part of the street party was devoted to a vintage car parade. There were cars as old as the 1929 Ford on the left, and as new as some souped up Hondas and such. Even Rocking Elmo showed up for the party, hiding in the shade of the truck's hood! 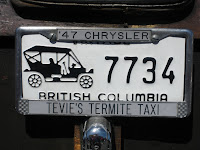 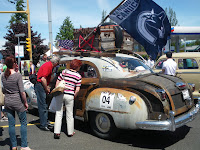 This was the most unique car at the parade. Most of the exterior seemed to be made from old wood, and the license plate holder was especially funny. 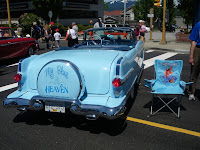 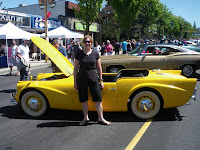 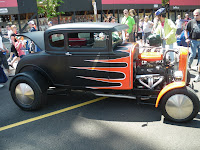 The cars were very popular, but all the shops along the street had special exhibits, food, music, and other stuff going on. 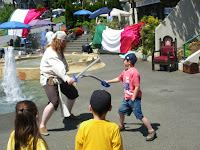 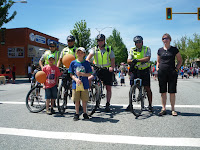 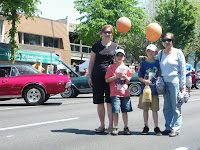 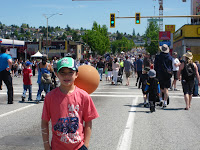 At the west end of the festival, some medieval reenacters set up a sword-fighting lesson and demonstration. Jacob was pretending to be Inigo Montoya looking for the six-fingered man who killed his father. At another exhibit at the bank, they were making wild paper hats. The fire department had a dunk tank - since it was such a hot day, the firemen were probably happy they were getting dunked! There was a 1954 fire engine at the fire hall. At an antique shop, there was a bubble making machine, where a rotating drum of bubble blowers kept sending bubbles out. 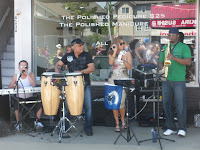 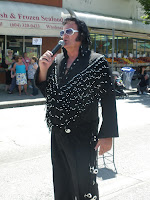 Lots and lots of musicians were out playing along the festival. There was music of all types, from Elvis and rock and roll through to music from around the world. There were also dancers. It made for a really fun atmosphere to the day. 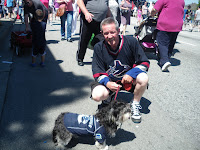 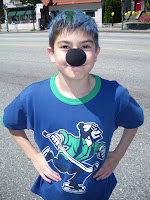 Being such a nice day and a fun party, lots and lots and lots of people were out. And being the Stanley Cup Finals, Canucks fans of all shapes and sizes were out in force. Jacob and I even got our hair coloured blue and green to celebrate. Two days later and my scalp is still blue! Here I am wearing a "Johnny Canuck" tee shirt. At the Canucks team store at Rogers Arena, Daddy says that there is a tee shirt with twin Johnny Canucks, only with red beards like the Sedin twins! 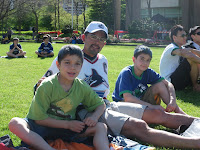 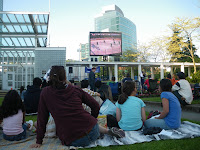 With all the Canuck fever, many municipalities are setting up outdoor venues to watch the games. We went to Metrotown in Burnaby, where they had a big 10x13 foot screen set up outside the library. It wasn't as crazy as in downtown itself, but it was still fun watching and cheering with lots of other people. And as an added bonus, we were right across the street from Crystal Mall and any type of Asian food that you could want! We went and brought back noodles, rice dishes, plus lots of sushi! 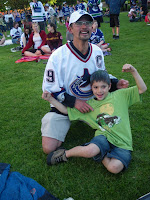 There were very few penalties this game, unlike last game. First the Canucks scored, but then the Bruins scored twice in the second period. But in the third period, Daniel Sedin scored to tie it up and send it to overtime. Eleven seconds into overtime, Alex Burrows faked out Tim Thomas and then got a wraparound goal for the winner. That was just two seconds more than the record for an overtime goal! We were wondering what the Zamboni driver thought about having to clear the ice again after only eleven seconds! Now the Canucks are up 2-0!
Posted by Anonymous at 19:41