The past four days, we went over to Galiano Island, one of the Gulf islands between the mainland of BC and Vancouver Island. It was about a 1h ferry ride from Tsawwassen, on the way to Swartz Bay and Victoria. We were invited there by Dr. Paul Harrison, my B.Sc. honours advisor from my UBC Oceanography days, and his wife Victoria. There are so many pictures that we've put 50 onto a flickr album that you can see here: Our Galiano Island Trip. 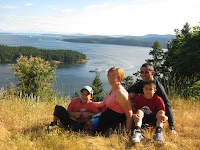 We spent three wonderful days getting away from the city life, the internet, phones, traffic, TV, radio, newspapers, everything! Nothing to do but to enjoy nature and the great outdoors. We were fortunate that nature cooperated with mostly excellent weather. Here we are atop "The Bluffs" park. Behind us is Active Pass, named for the strong currents. The island on the left is Mayne Island. A lot of ferries go through the pass, either on their way to and from Victoria or the other Gulf Islands. We did another hike up to Bodega Ridge, in the middle of island and the highest point too. 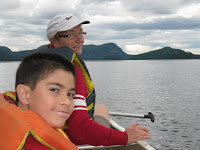 Paul and Victoria had a canoe at their cottage, and we borrowed it for a few trips in the morning when the waters were calm. We saw big caves of sandstone eroded into unusual patterns by the winds and waves. Some parts looked like honeycombs and others were very smooth and flat. Some of the rocks almost looked like lava, as they were very flowing and jagged too. Lots and lots of sea life in the intertidal zone, including starfish (who are the "lions" or top predators because they have no other predators), sea otters, jellyfish, barnacles, kelp, sea anenomes, crabs, and tiny fish in the tide pools. 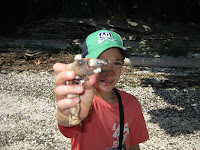 We spent a lot of time beachcombing. Here Jacob is holding a giant crab pincher - don't poke your eye out kid! The beaches had lots of bull kelp, some so long that we could use it for a skipping rope. We went to Montague Beach to go geocaching, but we couldn't find the "Kids Cache" that was right out at the point. 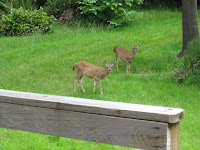 Galiano had lots of wildlife. There were lots of deer all over the island, and they had no predators and were very comfortable with humans. At the cottage, there lived about four deers nearby. Each night and morning, they would come out very close to the house grazing. They were so calm that even our opening the door and talking didn't scare them, and this was taken right from the front deck. Other animals we saw a lot of included snakes, herons, turkey vultures, and lots and lots of eagles, and hummingbirds. We canoed to a nearby rookery on the cliffs where a lot of seagulls and other birds made their home. 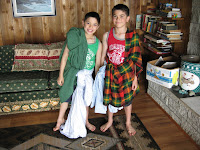 As always happens at cottages, we played lots of games. The main game we played was "Bananagrams," a game like Scrabble where each of you try to make a crossword. It was a lot of fun. Here the boys decided to dress up like traditional Scots in their improvised kilts.

Check out our other pictures: Our Galiano Island Trip!
Posted by Unknown at 03:19