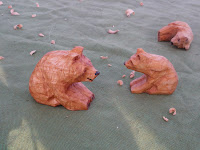 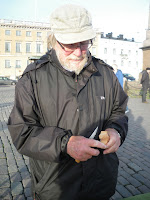 Had an interesting chat this afternoon with this gentleman down by the harbour, where he was carving small wooden bears. Carving these particular style of bears is a Finnish traditional craft, and actually is shared across much of the north of Scandinavia and Russia. Each country region has a slightly different style with their bears, and it's an art form that is re-emerging in popularity. The bears are magical and powerful creatures in many legends in these parts. One story he told was of how after hunting a bear for food, the skull would be placed up high on a tree so that the bear's spirit would return up to Ursa Major constellation, signalling more bears to the area and to protect the tribe. 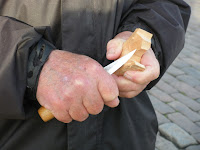 Other things we learned: the Russian style of bear tends to be more aggressive in appearance; willow is a great wood for doing the carving, because, while it's not necessarily a soft wood, it's very "even" and doesn't crack or chip. Also, his best carving knife has a harder cutting edge on a softer blade. Finally, the knife is from Sweden, marking one of the few times I've heard a Finn speak favourably of anything Swedish! 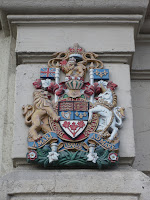