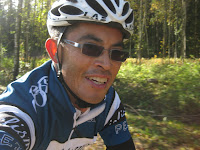 Nothing beats the bike as a means of exploring, and I've been especially fortunate that, every Sunday the past two months, the weather's been dry, sunny, and generally pretty pristine for a long ride in the roads to the west and northwest of Helsinki. 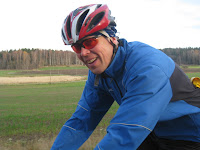 My very first ride, northwest on 110 at Veikkola, I saw a guy standing with his bike and on his phone, so I went over to ask if he was OK (yep). Later on the ride back towards Helsinki, we bumped into each other again and got to talking (this is rather rare - it's almost impossible to get a simple wave from a Finn when riding or running!). Juha Makela's a lawyer and we ended up getting in a few amazing rides together talking about tons of things when we weren't hammering each other silly, and our family also had a fabulous dinner (reindeer for appetizers and salmon for entree, plus my first real and good cup of espresso since I've been here!) together this past Saturday. Kiitos for the company and being my personal GPS! 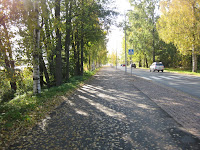 The bike path network in Helsinki is mind-boggling. Pretty much every road in the city and surrounding areas have wide bike/pedestrian sidewalks on at least one side if not both sides of the road. The paths are very wide, so there's almost never problems with crowding with pedestrians. There are underpasses every so often under the main road so that you often don't have to cross traffic at all. The paths are nice enough that I can keep a pretty decent average speed going throughout. If anything, there are TOO many bike paths, such that it takes a LOT of time to become familiar enough with the routes to not get lost or waylaid.
The one downside of cycling here in Finland is that we've gone through 5 flats and 2 tires! Today's flat while riding with Juha was nuts - I actually rode over a small piece of branch and a pretty large perpendicular sub-branch jabbed right through the rear tire and the branch was just sticking out at 90o! I spent a lot of effort pulling bits of wood out of the tire while fixing the flat to make sure it didn't re-puncture. 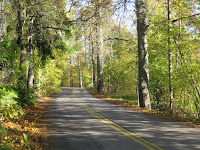 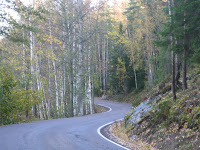 Once you get out about 25 km from the city, then you wind up on some really gorgeous roads. My main routes have been west to Bembole, and then north up around Veskola where these pictures are taken. The fall colours, the canopy of trees, the excellently-paved roads, and the lack of cars plus very courteous drivers, make the fall cycling a complete treat. No crazy steep hills, but it's also not really flat either. 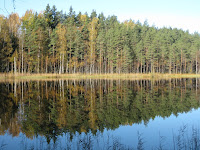 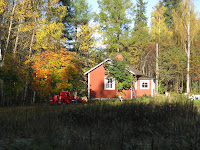 Finland has about a billion lakes, so you're never too far away from a nice view. This one on the left was also towards Veskola. The one on the right was near Bembole. The fall colours here haven't been too much in the reds or oranges, mostly yellows. Longest ride was today at 100 km, luckily with a strong tailwind the final 35 km!

Tuesday, it's onwards to Brussels and the Belgian heartland of cycling!
Posted by Unknown at 20:45