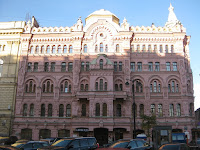 We didn't plan out our Tallinn posts very well so we are planing these St. Petersburg posts a little bit better.

I am calling this post St. Petersburg: Closed on Wednesday because we had a big laugh when we noticed that everything was closed on Wednesdays. These are some of the things that were closed: the Church on the Spilled Blood, Peter and Paul Fortress, St. Issac's Cathedral, and many others places!

We took the Monday night St. Peters Line ferry and got to St. Petersburg Tuesday morning, then we had from 12:00 to 6:00 at the Hermitage Museum. First though, we had a tour of the city courtesy of Anatoli (see Daddy's future post). The Hermitage is one of the largest art museums in the world but it isn't just all art there (but more about that later). We got a really nice room in a micro hotel where we were pleasantly surprised after reading some reviews of other hotels on the web (more on THAT later too!).

Although there was hard rain on Tuesday while we were at the Hermitage, it was sunny on Wednesday while we were walking around the city, and the fall colours made it really pretty. We walked around the city all day and saw lots of cathedrals, monuments, and important sites We found a great restaurant for lunch me and dad had Russian style fish and Jacob and mom had Chicken kiev.

We also went to Peter and Paul fortress to walk around. We took the metro and took that 1 stop and then we walked around the fortress then we walked back near St. Issac's cathedral and found a coffee shop and had dinner. The escalator at the metro was the longest one I have ever seen and it and the metro were very fast. Then at 6:00 we had to head back for the ferry and it started to rain. We got the last bus for the ferry and the driver really wanted to get us there on time. It felt like we were going faster than on a highway through the crowded streets. 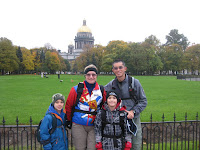 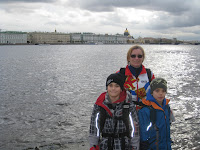 On the left we're all together (upright) with St. Isaac's Cathedral behind - 200 kg of gold on that dome! On the right we're on the Peter and Paul beach with the Neva river and the Hermitage behind us. 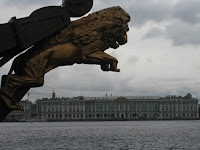 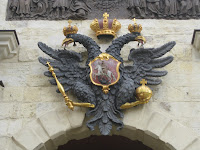 I really like the picture on the left, where it looks like the lion figurehead on the ship's prow is leaping over the Winter Palace. The two-headed eagle is the symbol of the Romanovs, the family of the tsars, and are everywhere in the city. 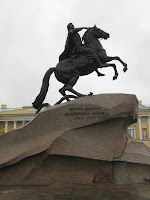 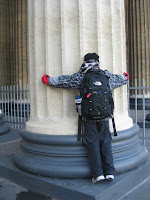 The famous Bronze Horseman statue of Peter the Great, made in his memory by Catherine the Great. Here on the right I'm tree-hugging this huge column at the Kazan Cathedral.

St. Petersburg was founded in 1703 by guess who? Peter the Great of course! Many people were forced into labour and died to build the city, so it was not always a happy memory of Peter. It was the capital of Russia until the Soviets moved it to Moscow. There was so much to see in St. Petersburg that we'll have at least one more post of just the sights - stay tuned!