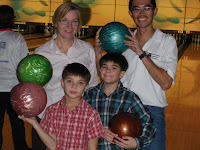 Hard to believe that we've just marked SIX MONTHS since we moved out of Fonthill! It's also 10+ weeks since our arrival in Helsinki and it's almost time for goodbye here! After giving a talk about what I hopefully learned during my stay, Heikki treated us and the lab to a celebratory night out. First up was some bowling, adding to the list of activities (outdoor rock climbing, frisbee golf, running, floorball, handstands!) I haven't done ever or in eons!

Group picture of my Finnish friends. Juha Peltonen's on the far left, Heikki Tikkanen's is on the right next to me, and poor Harriet Haglund (far right) had to put up with my 80s music fetish in our shared office. 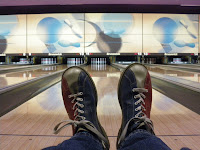 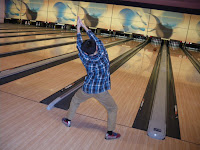 It's been a while since the last "Daddy's Feet" picture, but at least I got one in from Finland! And no, that shot was planned and not from me falling on my butt sliding down the bowling lane! Zachary is either practicing his All Blacks "Haka" or else doing some advanced yogic body english to get the ball to curl! Debbie just missed cracking 100, but at least we all kept our balls in our own lanes and didn't drop the balls on our toes. 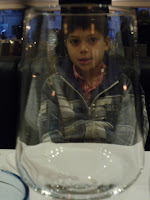 Next up was a fancy meal at "Motti" restaurant. Here's my artsy picture of Jacob. 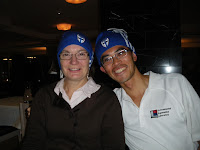 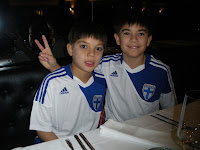 As farewell presents, the lab also dressed us up as proper Finns. The hats should keep us warm in Belgium! 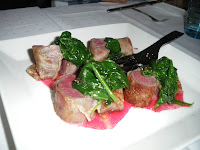 The meal was terrific if a tad slow (as in about 3h delivery for 6 courses!), but it gave all of us lots of time for conversation. The meal was very fancy and haute cuisine. Some notable dishes included grilled river lamprey, which was certainly a first for us and which led to me getting a lot of extra lamprey - not bad at all really! There was also cabbage rolls with duck meat in a cherry compote, which was awesome. And up above, Santa has one less reindeer for his sleigh this Christmas, but it was delicious with vanilla cabbage on top.
Posted by Unknown at 13:59