House of Horrors - Luckily Not!

There are many mini-hotels in St. Petersburg that are established in apartment building that were built in Soviet times. There apartments would be divided into sections that contained several rooms (up to 10 or so) that an entire family would live in and then a shared kitchen and bathroom. Now these have been converted into small hotel rooms that still use the shared kitchen and bath. 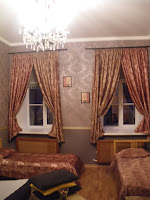 It's always nice to have your stereotypes and pre-conceptions shot down in flames. We had read reviews of dirty, dark stairways to micro-hotels on the 5th floor because the hotel doesn't actually own the stairwell and with more than a little trepidation booked at Hotel Adagio - it had no reviews at all and was cheaper than several others with dodgy reviews! We were well pleased though - it was located within walking distance to the heart of Nevsky Prospekt along the Fontanka River. It had a large, nicely decorated room with 3 beds and a sofa. Although the bathrooms were shared they were very clean and there was a large shared kitchen where we were served a small continental breakfast in the morning. There was even a washing machine and bath tub in the bathroom.  The hotel administrator Xenia was friendly and spoke reasonably good English.

We would stay again or recommend our friends to stay at Hotel Adagio ($96 CDN on Expedia). What could have been a bit scary turned out terrific! But to live here as a family in a communal apartment of maybe 20-40 people total, with no choice in neighbours, could be another matter altogether! Apparently that's still common practice even post-USSR in St. Petersburg, with some of the areas outside the city amongst the worst slums in Europe.