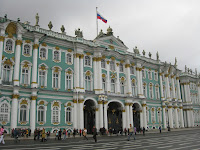 The Hermitage Museum is one of the world's largest art collections housed in a magnificent palace and inspires awe in the 3 million visitors who come here every year. The halls and hundreds of rooms of the museum cover 20 km and can only display 5% of the 3 million piece collection. It is said that if you looked at each item in the museum for only a few seconds it would take over 11 years to see it all. 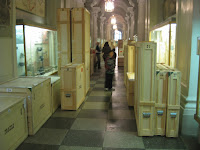 Entry was only 400 rubles (~$13 CAN) for adults (Russian citizens 100) and free for kids. Since forever, there's been a huge price discrepancy in Russia for citizens vs foreigners. I read that a group of foreigners actually won a court case about this, but many places still keep the practice going. Anyway, there were treasures everywhere you turned in the Hermitage. On the right is a shot of a basement hall, where there were all these storage boxes crammed in amongst the displays! 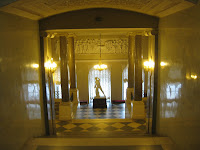 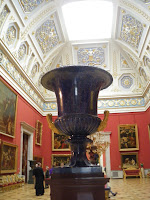 The Hermitage Museum is made up of 4 buildings. The first and largest is the green, white and gold Winter Palace (Zimney dvorets), build on the banks of the Neva River. It is the grandest building in St. Petersburg and was commissioned by Peter the Great's daughter Elizabeth and designed by the Italian architect, Bartolomeo Rastrelli. The other buildings are called the Small Hermitage, the Large Hermitage and the New Hermitage. The buildings themselves are as much masterpieces as the art housed inside of them.

Obviously, it is impossible to describe it all but suffice it to say we have never been in such a place as this or seen so many art masterpieces. Here are some of the highlights: 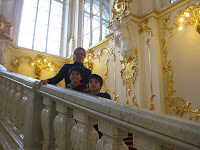 THE JORDAN STAIRCASE
This beautiful twin curved staircase was designed by Rastrelli in 1762.  Jacob counted 79 marble stairs leading to the top. It is made of Carrara marble and has decorative balustrades, mirrors, gilded trim and statues. It was once the staircase used by ambassadors and diplomats visiting the Tsars and Tsarinas here. It has survived destruction by both Catherine the Great (who didn't like the Baroque style) and the fire of 1837 that destroyed parts of the palace.

THE STATE ROOMS
Nicolaev Hall, known as the Great Hall, is a magnificent gold and white room with huge crystal chandeliers. It used to be the scene of lavish balls. The blue and white Concert Hall currently displays Russian silverware and the centrepiece is Alexander Nevsky's silver sarcophagus. This room connects to the Malachite Hall which is the smaller but possibly the most impressive. It was desined in 1839 as a drawing room for Nicholas I's wife, Alexandra. It is decorated with more than 2 tons of green malachite from the Ural Mountains. It was also where the counter-revolutionary Provisional Government had their final meeting in 1921 before they were arrested by the Bolsheviks in the dining room next door. We wandered through the Portrait Gallery of the Romanov's, Field Marshall's Hall, The Small Throne Room 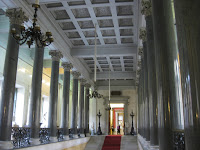 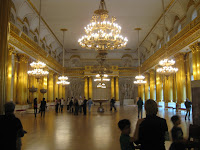 On the left is the Chamber of Columns, for obvious reasons. On the right is Nicolaev Hall.

THE ART
Considering that the Italian art collection from between the 13th -18th century spans over 30 rooms, a short description isn't going to do justice to all that we saw. I was just amazed by the amount of incredible artwork that we saw. During my "formal education years", I somehow missed out on learning anything about famous art or artists and it is only now, during our homeschooling years that I am learning to appreciate great art. Needless to say, by the end of the day, I was overwhelmed and things started to blur together but I was thinking that it would take years just studying the history, stories and people portrayed in this gallery.

The Italian Rooms included works by Leonardo da Vinci, Raphael, Michelangelo, Botticelli and Caravaggio. In the Flemish and Dutch room there are an astounding collection by Rubens and Rembrandt. Unfortunately, we realized at the end of the day we had missed room 254 (Rembrandt) in our meanderings and were all too footsore, foggy and headachy to make the 1/2 km trek back there. We did see several painting by Pieter Brueghel the Elder, which I recognized instantly thanks to our art appreciation classes with Karen. Also thanks to Karen, I had an idea about what is meant by French rococo, with works by Watteau, Boucher and Fragonard.

The Impressionists and post-Impressionists take up most of the third floor - Monet, Renoir, Degas, Van Gogh, Cezanne. There are rooms each full of paintings by Gauguin (15), Matisse, Picasso, Kandinsky. 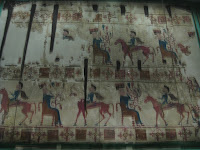 And I haven't mentioned the ancient artifacts  from Egypt, Greece, Rome to Siberia on the first floor. One of the most remarkable things was an ancient Scythian woolen carpet from approx. 400 BCE that was large enough to cover an entire wall up to the vaulted ceiling. It had been preserved by a thick layer of frozen ground over the burial mound it was recovered from. Although we kept an eye peeled for it all day, I don't think we saw the 19-ton Kolyvan Vase, although we did see immense vases made from malachite and lapis lazuli among other precious stones.

The Hermitage is a place you could go again and again and likely never see everything. I am just glad that we were able to spend a day here and to see as much as we did.