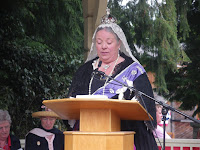 Today was Victoria Day, which celebrates the birthday of Queen Victoria, who reigned from 1837-1901. Victoria Day was first celebrated in 1953, as the first Monday before May 25th. It is also the official birthday celebration for Queen Elizabeth II, her great-great granddaughter. We visited there with Auntie Michelle and our cousins Chas and Ben. As you can see from the picture on the left, the Queen looks amazingly good for 192 years old! 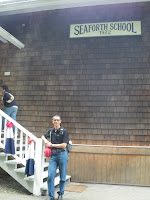 This being BRITISH Columbia, there were a lot of festivities. We went to Burnaby Village Museum in Deer Lake, very close to MaMa/YeYe. They had free admission today also to celebrate their 40th anniversary. The museum is built up as a small village, with many buildings as they might be around the start of the 20th century. Some of the buildings included a school, which was actually a real school. In fact, it was Daddy's old elementary school! We didn't realize Daddy was that old, but that probably explains the white hairs! It was the original Seaforth School, which was built in 1922 as a one-room schoolhouse. It stood at Seaforth's site at Government Road and Piper Road, where Daddy went, and was moved to the museum in 1983.
Other buildings in the village included an old-fashioned ice cream parlour, a post office, general store, a Royal Bank of Canada branch, a music shop, a bakery, a movie theatre, a chapel, the Burnaby Post newspaper, an old pioneer log cabin, an outhouse, blacksmith, mechanics shop, and a Chinese herbal shop. While there, the herbalist, Mr. Danny Lau, taught us how to add and subtract using an abacus. If you know how to use it, it can be much faster than a calculator, and they are still often used in Asia and Africa. Each column represents ones, tens, hundreds, thousands, etc. Each column is in two sections, with five beads in the bottom section and two beads in the top. So four beads in the bottom would indicate 4, while 1 bead on top would indicate 5. So together, four beads on the bottom and 1 on top indicates 9. Easy!

While we stayed with Glenn in Fonthill, he kept moaning about his childhood and how his parents left him and his sister by the side of the road to greet the Royal Family whenever it visited Ontario. Therefore, Daddy decided that we should get a sense of Glenn's deprived childhood by having us stand on the side of the road as Queen Victoria drove by Burnaby Village. It wasn't even the REAL Queen Victoria, so I think we got it worse than Glenn!


Did you get the right answer to the abacus number? If you said 37,925, go find yourself a piece of cake to celebrate Victoria Day with us!
Posted by Anonymous at 01:57