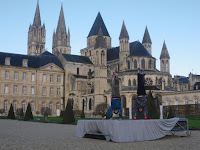 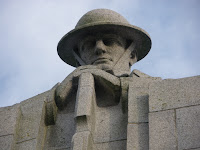 Three wars: Abbaye aux Hommes, site of William the Conqueror's tomb in Caen; St. Julian's Monument, marking the site of Canada's fight during the first gas attacks of WW1; and the boys at Juno Beach, site of the Canadian landings in Normandy in WW2. 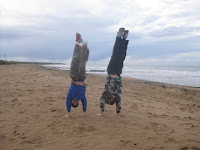 As you know from previous posts, we just returned from spending 4 days in Normandy, France. The overall theme of the trip was War Studies. We visited sites related to William the Conqueror - the Chateau in Caen, Abbaye des Hommes in Caen (where the last of his bones are buried) and the Bayeux Tapestry which tells the story of the battle of Hastings and his retrieval of the throne of England, usurped by King Harold. We also visited WW I remembrance sites - Vimy Monument, Vimy Centre with tunnels and trenches, the town of Ieper (Ypres) with the Menin Gate and the evening Last Post and the John MacCrae Memorial. We also spent a lot of time at the Caen Memorial to WW II and visited the German Cemetery, Omaha Beach and the American Cemetary, Arromanches Harbour and Juno Beach.

See more upcoming blogs about all of these amazing sites. We also looked up and found the description for my great-uncle Albert Joseph Buhlman, a tank crew who was killed in the last days of WW2 in Europe and buried in the Netherlands.
Posted by Debbie at 12:07