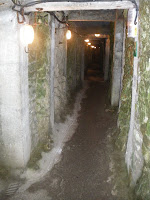 Vimy was the spot where the two fronts were the closest in all the war, the German trenches and the Allied Trenches were only 25m apart. Down in the tunnels there were small rooms for the officers, planning, and the Runners quarters. there were 4 ways  of communication: telephone, telegraph, pigeons, and runners. The telephone and telegraph weren't good because they made noise that the Germans might hear and the wires often got blown up. Pigeons worked most of the time, but you couldn't really control where they flew to and the messages might go to the wrong person or even to the enemy. Below on the right are telegraph mountings. 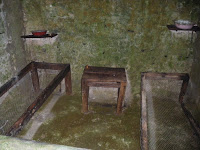 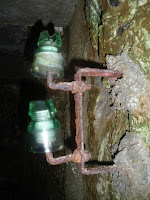 That left runners as the best system for much of the entire war. You had a great life as a runner: you got to live and sleep in the relative safety and comfort in the tunnels, with an actual bed! The pay was also 6 times a normal soldier salary! The downside is that you wore a white armband to let your side know you're a runner and not to shoot you. But that also didn't stop you from getting accidentally shot anyway. Worse, you were the favourite target for the enemy side to shoot or capture (your message was in code, so you wouldn't know what it meant). It's so bad that your life expectancy can be as low as 3-4 days.
Posted by Anonymous at 20:17