The Trenches of Vimy 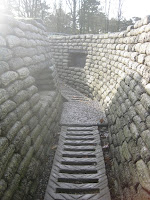 The trenches were where all the soldiers stayed during the battle. The walls were made of sandbags filled with dirt. On the floor, there were "duck-boards" to help them stay out of the mud, but it was still very wet and muddy there. They would sleep in spaces in the wall that were a little wider. It was always a challenge to keep all their equipment dry. There were even rats in the trenches. At Vimy, the trenches were the closest together of anywhere along the battle lines. At some spots, there was only 25 m across "no man's land". You could almost play "rock, paper, scissors" with the enemy. 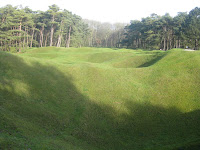 This is not a golf course, but part of no-man's land between the Allies and Germans. These are from all the craters from the bombing. It is all fenced off still because of bombs and shrapnel keep appearing. Now imagine living in these trenches all the time when 1916 and 1917 were some of the rainiest years of the whole century.