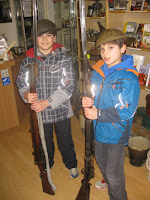 When we were walking on the streets of Ypres after trying to find the John MacCrae site, we found The British Grenadiers shop on the main street near Menin Gate. There were old ignitor shells from the artillery (solid brass and VERY heavy!), shell casings and bits of shrapnel that were found on the battlefields.The owners name was Steve Douglas and, surprise! - he is from Kitchener - Waterloo, Ontario! He had lots of books and videos in the shop. There was also a machine gun, old rifles and helmets from WWI. Here you can see us trying them on.

Mr. Douglas was very nice, helping us with directions to the MacCrae site and also telling us where "Private Peaceful" was buried nearby at Bedford House Cemetery. That's a novel that Zachary, Daddy, and Mommy had all just read, by the same author as "War Horse," and seeing the name inspired the writer to write the book. 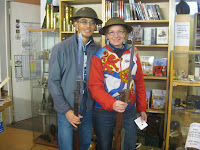 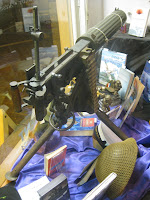 Mr. Douglas came to Belgium to work on the Maple Leaf Legacy project. It is an internet site trying to link pictures of Canadian soldiers and their grave sites all around the world with a biography so there is a permanent record for future generations. We found out that there are even Canadian soldiers buried in northern and far-eastern Russia! The logo for the Maple Leaf Legacy is taken from the maple leaf graffiti in the Vimy tunnels I wrote about before. 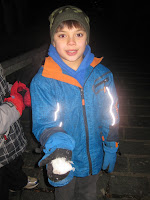 The first snow of the year! Actually, it's snow scrapings from the outdoor rink they have set up in the main square in Ypres.
Posted by Anonymous at 09:08