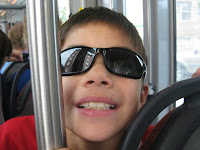 Wow, Jacob just blows me away with his amazing memory. Two examples:
1. While walking around the rider pits at the GP Hasselt cyclocross race last month, out of the blue he says, "Hey, Stybar and Bart Wellens have the same watch as you!" This was in reference to my Polar RS800CX watch, which I got back in early 2009 and hadn't really worn regularly since probably mid 2010. It wasn't as if we were talking about watches, looking closely at the riders watches, or anything like that!
2. This week, I was talking about a paper that Geoff and I are revising, and how I had the original idea for it while hanging out at Geoff's apartment. Jacob instantly says, "You mean the time that Geoff shot himself in the foot?" Turns out that was in reference to the one or two times that I brought Jacob with me to Geoff's apartment while Zachary was at gymnastics, back in early 2009. Jacob and I taught Geoff the card game "Skip-Bo" and Geoff had messed up one key move. So that was one card game from when he was 6.5 years old!

Email ThisBlogThis!Share to TwitterShare to FacebookShare to Pinterest
Labels: Family