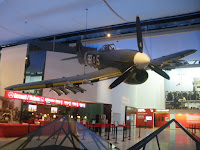 Monday was the rainiest day on our trip to France; it was very wonderful weather  (if you happened to be a duck). So it was a perfect museum day. We spent 5 hours at the Caen Memorial and then drove to see the Bayeux tapestry.

The Caen Memorial is a WWII museum built by France that "tells the whole story" of WWII, rather than just focusing on battles. It starts after WWI with the treaty of Versailles, talks about economic collapse in Germany and Hitler coming to power, Mussolini in Italy, Hitler taking over Austria and Czechoslovakia. Then to USSR/Germany attacking Poland leading Britain and France to enter the war. There were sections on the treatment of Jews, the lives of the soldiers, weapons, and resistance fighters. There was also a lot on how the people of France dealt with the German occupation. Some were for working with the Germans while some fought against it. 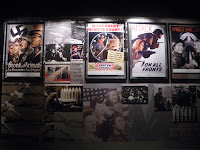 There was a film about the D-Day invasion of Normandy; on the right it had video from the German side and on the left video from the Allied side. Twenty-one men were tried at the Nuremburg war crime trials and a video about that played. On the right are propaganda posters from different countries. 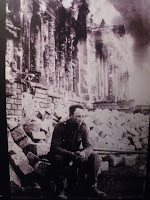 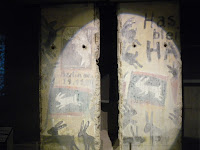 On the other side of the museum, there were displays about after WWII. There were photos of the bombed cities like Caen. It talked about the Cold War between the USA and the USSR. It also talked about how Germany was divided in half by Communism. there was a big concrete wall between East Berlin and West Berlin that was 160km long. It prevented people travelling from East to West Berlin. The Berlin Wall finally was taken down in 1989 and there are two pieces of it at the Caen Memorial.
Posted by Anonymous at 14:37