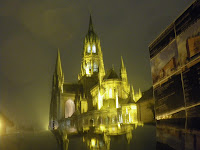 The Bayeux Tapestry is a big 70 m long tapestry that was embroidered in the 11th century. It tells the story of how King Edward II of England sends Harold to Normandy to tell William, Duke of Normandy that he will succeed King Edward when he dies. When Harold returns to England, Edward is dying and Harold convinces the people to crown him king instead. When William hears of this, he gets together a big army and comes to England. The battle is called the Battle of Hastings and Harold is killed. William becomes the King of England and is known as William the Conqueror. That's a rainy night shot of the cathedral in Bayeux.

The tapestry is over 900 years old. It is over 70 metres long on linen cloth. It uses 10 colours of woolen thread and 4 different stitches. It has over 600 embroidered people, 200 horses, 40 ships and hundreds of animals and mythological creatures. 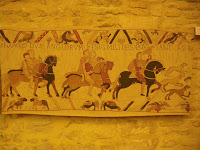 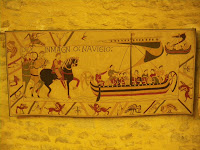 When it was made, it told a story, full of twists and turns, spies and heroes, to people who might not be able to read. So it's one of the first comic books in history! The Bayeux Tapestry is listed in the UNESCO "Memory of the World" register. I thought it was very interesting and colorful and it is amazing that it has lasted for over 900 years and is still in such good condition. There's no photography allowed in the actual tapestry room, but these are other tapestries there that were made recently in a similar style.
Posted by Anonymous at 09:35