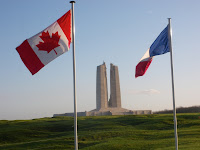 The Vimy Monument was made after the Battle of Vimy Ridge as a monument to the Canadian soldiers who fought there.  The area of Vimy Ridge was important because from the hill, you could see all the way to Belgium, so if the enemy didn't want the Allies to see them, they would have to go very far back.

The Germans had taken control of Vimy Ridge in 1914. The British and French had both tried to take Vimy Ridge back from the Germans and had failed. The French had lost 150,000 men in the battles around Vimy and the neighbouring town of Arras. 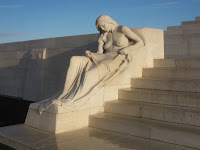 This was the first time that Canadian divisions had fought together as a unit. There were 4 divisions. The British had already made a lot of tunnels and trenches. The Canadians were attacking along a line 6 km long supported on the sides by British and French soldiers. They planned the battle for a snowy day so the visibility would be worse. The Canadians were lucky that the snow was blowing towards the Germans. Also they were more used to the cold. The battle started at 5:30 AM on Easter Monday April 9, 1917 and by April 12 they had succeeded in taking back the whole ridge. 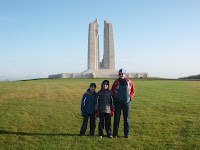 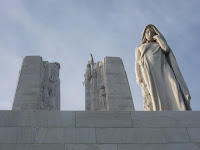 After the war the Canadian Battlefield Memorial Commission was set up to create monuments to remember Canada's part in the war.  There are 5 monuments in France and 3 in Belgium with the largest at Vimy. There was a contest for the best design. There were 160 entries from which 17 were selected to build a model, from which the winner was chosen. The winning design was by Walter Seymour Allward from Toronto. 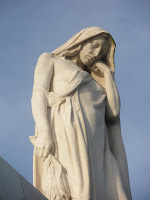 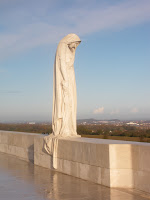 The stone used was limestone that came from Croatia. It was very difficult to figure out how to transport the huge blocks. Construction started in 1925 and lasted for 11 years. The base of the monument is 7 meters high and is made of huge blocks of limestone with stairs at the front and back. There are 2 big vertical columns that are 30 meters tall. Around the base and at the top of the columns are 20 carvings of figures representing hope, peace, courage, valor, grieving parents and some others. 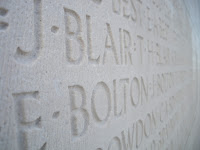 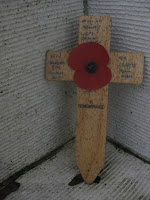 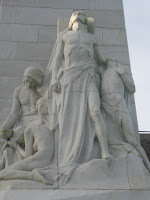 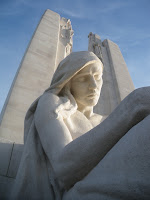 During WWII, there was great concern about the state of the memorial when the Germans were occupying France. Apparently, Adolph Hitler took a picture in front of the monument and sent it to the Allies to show it was unharmed.

The Vimy Monument was very impressive and a moving reminder of all the Canadian soldiers who fought during WW I.
Posted by Anonymous at 11:22