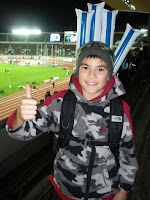 On the 9th and 10th we went to the big Finland vs Sweden track meet (mentioned in the Paavo Nurmi post) at the Helsinki Olympic stadium. On the first day the Finns got off to a really good lead. but in the second day the Swedes got back and won for the women but not quite the men because the Finnish men had a good end and won 3 things. On the first day they were handing out thunder sticks and tattoos so we used the thunder sticks and saved the tattoos. There was lots of cheering and the Finnish competitors even had the tattoos! Thanks to our friend Heikki for getting us tickets undercover to save us from the traditional "sunny yet raining" Finnish weather! In three out of four relay races, the Finns dropped their batons - must be because of their slippery "Finns!"


This weekend Heikki got us some tickets to the Finland vs Sweden track meet, because he had some friends that he had worked with on the Finland track team. it sounds easy but I don't think it was - kiitos! Both on Friday and Saturday we had VERY good seats. In the stands it was about 70% blue and 30%yellow. Talking about yellow sometimes at the track meet where the louder you shout the farther the virtual Javelin goes our record was 95m, there were also one were you do the wave, and another were it was just like a chant. For the Hammer throw and the javelin there were little remote control retriever machines they were in other words just a labor saving device. That would be a fun job! 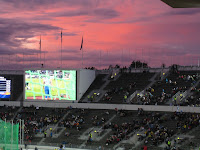 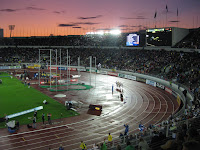 These are amazing sunsets don't you think with the sun disappearing and on the right the wet track shining?

Here is a Finnish pole vaulter about to jump 5.35 metres 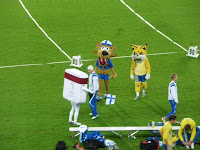 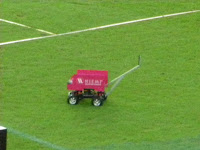 Here on the right I think is the best droid (or from veggie tales as mr. Lunt would say "it's not a toy, its a labour saving device!"). It is for getting the hammers, javelins (you can just see this flying around with the end of the javelin sticking out at you), and the discus back to the competitors.
On the left is the teams mascots at the end of the meet the Finns pushed their mascot (the dog with the blue jersey) into the water-pit along with 2 teammates. we don't know who the white one is for but the cat is for the Swedes.