Guess Who's in Oulu?

I spent two days this week just south of the Arctic Circle in Oulu visiting my colleagues Hannu Rintamaki, Juha Oksa, and Sirkka Rissanen at the Finnish Institute of Occupational Health. We're all regulars on the ICEE circuity, and I've known Juha since ICEE 1996 in Jerusalem. It was a great couple of days getting to see their facilities first-hand, and of course getting to bond a bit better outside of conferences and email. 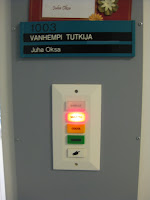 If there's one thing we've learned, Finns are fanatical about security. Keys are needed multiple times to get anywhere in our apartment and at the lab, and the same here at FIOH. But what I loved the most was the doorbell system at FIOH. Outside everyone's office, there's a buzzer to push. The occupant can then push different buttons inside that flash red (busy - go away!), yellow (wait and hold your horses - I'll get to you sometime), or green (The Doctor will deign to see you now!). I can just imagine students and me being in a constant battle of their buzzing me and my keeping punching the red button!

Bonding in Finland is done best in a sauna. And just to prove how tough Finns are, Aada, Juha's Nova Scotia Duck Tolling Retriever, insists on joining in on the fun! Apparently she whines like crazy if she's not allowed in, and unlike me, she's smart enough to get out once the heat starts soaking in through the fur. Juha is a keen hunter and Aara's a keen duck tolling retriever! 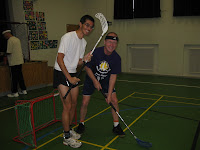 And being an "exercise" physiologist, another keen aspect of bonding is doing sports together. So far on this sabbatical I've gone rock-climbing with Phil Ainslie in BC, beach racquets with Andreas Flouris on Crete, running and frisbee golf with Juha Peltonen in Hameenlinna. Here Juha Oksa introduced me to the Finnish passion for floorball, essentially floor hockey with a big wiffle ball and plastic-bladed sticks. We played at the institute's regular Thursday pm game right before some rally-car driving to get to the airport for my flight home. Despite never playing any organized hockey of any kind, I managed to avoid completely embarrassing Canadian pride and even scored two goals in a team victory! 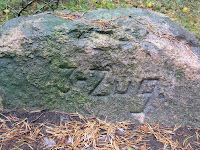 The urge for humans to "mark their territory" is apparently eternal. We went to the National Museum this week and saw an exhibition on Stone Age cave/rock drawings in red ochre around northern Finland, from 4500 years ago or so. And here by Juha's house in Oulu, German soldiers during WWII carved "3rd Company" into a rock to prove their existence. Given the workmanship, these soldiers were here for the duration, and not just strolling through.
Posted by Unknown at 08:03