Yesterday daddy did the 10km Helsinki midnight run that started at about 9:00 and ended (for dad) at about 10:00 (47:52!). So it wasn't actually a midnight run. For doing the race you got this bright orange shirt that would be easy to see from miles away. There were lots of people dressed up in costumes there was even a banana eating a banana isn't that bananabalism? There were also some robbers when we got a picture we should have asked then to pose by the police car right behind us besides those there were blue and white men I'm not sure about the white man but the blue man had a full blue suit on. Also a bumblebee and ladybug, a flying chicken, and daddy even passed a guy dressed up as a baby and sucking on a pacifier the whole way! 2010 was the first year and they had 4600 runners! There are also Midnight Runs in Stockholm and Goteberg in Sweden along with Copenhagen. 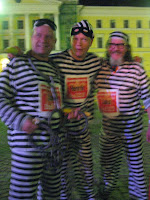 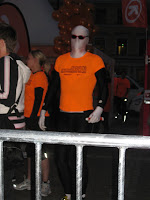 The three crooks were hiding in the portopotties can you believe they ran that race without being caught right now they are smiling at the police car that is right behind us. On the right is the white man with the bright orange shirt. 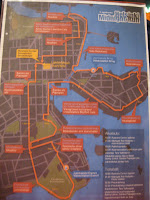 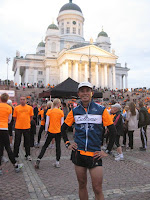 Daddy's Note: The run map on the left shows the course right through downtown Helsinki (lots of cobbled streets!), beginning in Senate Square at the Cathedral. When I first got to the square, the sun was starting to come down and turned the entire side of the cathedral orange to match all the orange shirts and stage - very cool! It was a perfect night for running, about 16oC still and almost no wind. The course was tough because of the cobbles and especially the multiple twists and turns. More importantly, it wasn't raining! There were loud samba bands and other live music all along the course and people cheering, so it was a great evening. I spent a lot of time high-fiving bystanders and shouting for joy at the sheer exuberance of the day. As Olaf would say, "Are we lucky or what?"

For me, the run was the running equivalent of a "no chains" day on the bike. I couldn't believe how well I felt throughout the entire 10 km. I just kept pushing harder and harder the whole way and the body kept responding with that "good" feeling of hard effort. Passed a ton of people throughout and I think I came close to the front of the whole 50-55 min pack. Didn't have a bad patch at all except for about 5 s during the long cobbled uphill near the finish. I was hoping to beat 50 min ideally, and ended up doing so by >2min with a final time of 47:52! I even did a cartwheel across the finish line and managed not to kill myself or anyone else! Nearly gagged up water at the first aid station so threw that away. At the second, I was hoping to grab water to toss over my head but ended up grabbing sports drink instead - good thing I took a testing sip first before pouring on myself!

Here is a video of everybody warming up there was still music going on
Posted by Anonymous at 07:19