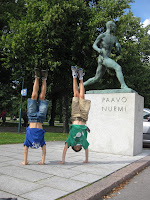 Paavo Nurmi was a Finnish runner who competed in 3 Olympic games. He was born in Turku, on the west coast of Finland, on June 13, 1897. He was known as one of the "Flying Finns" a group of Finnish runners of the 1920's.

He won 12 Olympic medals altogether. He got 9 gold and 3 silver. At the 1920 summer Olympics in Antwerp, Belgium, he won gold in 1000m, individual cross country, cross country team, and silver in 5000m. Then at the 1924 Paris, France Olympic Games he won Gold in 1500m, 5000m, Individual Cross Country, 5000m cross country team, and 3000m team. Finally at the 1928 Summer Olympics in Amsterdam, Holland, he won Gold in 1000m and silver in 5000m and 3000m Steeplechase. He is often considered the greatest track and field athlete of all time. After that he couldn't compete because he was considered a professional.

In 1924, he won gold medals in all 5 events he entered and there was only 26 minutes between the 1500m and 5000m races. He was "A Great Silent One" because he didn't say much off the track. Once after a speech was made about him in the United States, all he said was, "Thank you."

Paavo Nurmi was considered a Finnish national hero and was the lighter of the Olympic Flame at the 1952 Helsinki Summer Games. We have been to this stadium to watch the finish of the 2011 Helsinki Marathon.

There was always rivalry between the Finnish and Swedish Track and Field teams. There is an annual track and field event between them. There is also a general rivalry between Finland and Sweden. Once there was a practical joke on the Swedish. Some Helsinki University of Technology students planted a statue on the 300 year old Vasa ship just before it was raised from the bottom of the harbor in 1961. We also visited the Vasa Museum when we were in Stockholm.

Thanks to Daddy's colleague Heikki Tikkanen, we have prime tickets to this weekend's big "Finland vs Sweden" track meet at the Olympic Stadium. Jacob and I are thinking of confusing everybody by wearing our Norway shirts to the meet!
Posted by Anonymous at 13:59