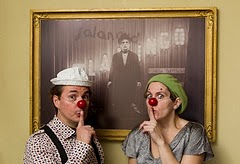 On Wednesday we went to Tallinn, Estonia by ferry for the day we went to find the Canadian embassy and we actually ran into a clown house called PiiP ja TuuT. Piip means a female clown and Tuut means a male clown (in Estonian). Piip said that the Canadian ambasador is proud to have the only embassy that is beside a clown house (supposedly) and when his friends visit him he shows all of them the clown house. We were thinking of banging on the embassy door and asking for some maple syrup! We stopped by the clown house and mom and dad had some coffee while me and Jacob had tomato and cheese soup on the stage. that night (when we were not there) they had a play about Piip and Tuut go to Mars there is also a little play place upstairs with a bunch of tunnels. In the future they want to make a tunnel going all across the stage and back again and make little windows so people can watch the play from above. 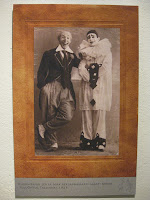 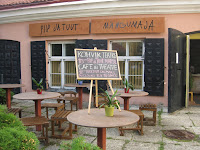 Daddy's Note. We're not kidding that the clown theatre is right next to the Canadian embassy. It turned into the most unexpected and pleasant surprise of our trip to Tallinn. We were wandering around the embassy and aiming for the viewpoint next to the Toompea city walls when Haide (Piip) saw us as she was clearing the patio tables and invited the boys to come in and look around. Haide and her partner Toomas (Tuut) have been performing and touring together since 1999, and just set this cafe/theatre up last October. On the walls are vintage portraits of clowns from the 1920s and 1930s, and there was a kid's play area up on a loft with a sliding wall down to the main floor. The coffee and soup were excellent too, and it's so much fun when you find a surprise like this and also see somebody living their dream to the fullest like they obviously are. 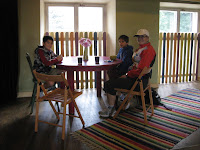 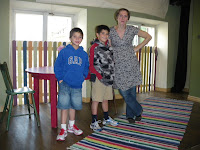 Here we are acting on the stage with mom and Piip.