Sept 7 we took the ferry for a day trip to Tallinn, Estonia. In Tallinn we went to the town square where there were lots of stalls there were even some strawberry hats. There were lots of seuveneirs like an Estonian oven mit and some Estonian and Finnish scarfs. We took the fast ferry (which takes 2 hours) but there are also 2 other ferries one doesn't even stop in Tallinn because it is just used for buying alcohol  (and toblerone!). The third ferry is the slow one.

Captions and history by Daddy
A "Tall" set of pictures!

There's very few cooler activities, in my mind, than hanging out in the old town square of a European city. This is the "Old Town Square" in the lower town, and the big building is the town hall. Tallinn has been in recorded history since 1154 (in a map by an Arab cartographer). In the opposite side of the square sits what is purported to be the oldest pharmacy in Europe, dating from the 1400s. That's about the age of most of the heritage buildings up the main part of the old town, with many buildings still remaining from their origins in the 1350s. Also from that period is the "Great Guild," of tradesmen and important townsfolk, where you had to be married to be a part of. That's because single men were viewed as having no "attachment" to the town, and they belonged to the "Black Heads" society instead. 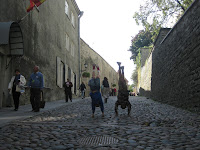 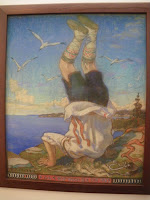 The "Handstands Around the World" theme is getting so popular that even the Estonian painters are getting in on the act! Here the boys are hand standing on the steep cobbled path up to Toompea, the old city overlooking Tallinn. The two used to be competing and separate medieval cities separated by a wall. Just a bit further up the street than where the boys are hand standing, we ended up having a very nice supper in a restaurant, where Debbie and Jacob both had crepes filled with mushrooms and blue cheese. Keeping up the Cheung family tradition, I went for the seafood (salmon) pasta! 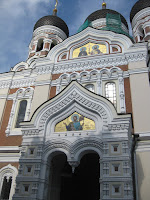 Estonia, like many former Warsaw Pact countries, is an interesting mix of three themes: its own ancient history, struggling to be a "modern" European country, and its Soviet-dominated recent history. Since its Soviet occupation, Russian immigration and Estonian deportation has resulted in native Russians being about 1/3 of the population. The grand "Alexander Nevsky" church in the upper town is very Russian, and is not embraced to the same extent by ethnic Estonians as the St. Olav's church (tall tower below right) in the lower city. St. Olav's was also an interrogation and holding centre for the KGB, yet another example of the town's conflicted history. 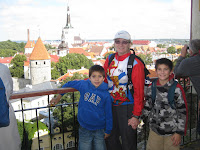 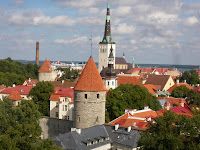 The upper town is packed with important buildings and narrow cobbled streets. Many of the embassies (Canada, Netherlands, Finland, Ireland) are in the upper town - not a bad spot at all! The parliament building is right across from the Nevsky, and the prime minister's residence has a plaque to the members of government who were exiled or killed by the Soviets during WW2. 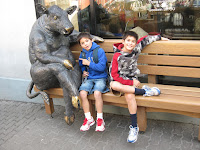 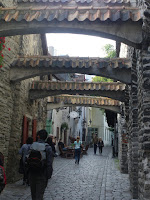 The old town is typical of many Euro cities - full of narrow and beautiful cobbled streets, but also rather blighted by the preponderance of tacky tourist shops. Really, how many shops and stalls do you need selling the exact same mass-produced souvenirs? It wouldn't be an exaggeration to say we passed >50 such shops during our walking tour. Walking over to Kadriorg Park and the Kumu art museum (see future post), you're immediately struck by how far Tallinn and Estonia have to go to "modernize." The buildings immediately have that ramshackle look of needing a lot of maintenance and paint, and the trams definitely fit the mental stereotype of utilitarian, and just a bit scary, Soviet technology. 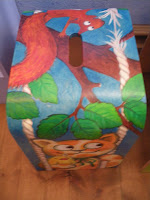 One really nice surprise in the old town, right next to the "Fat Margaret" tower and the start of the old town, was a children's library and art gallery. It was also used as a KGB post before then.