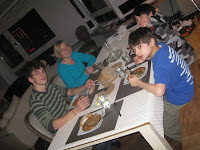 Between Christmas and New Years, our former exchange student, Stefan, from Germany visited us. He is currently studying at the University of Zurich in Switzerland. We were very pleased that he could come and visit even for a short time. I think Jacob did a blog about some of the things that we did. 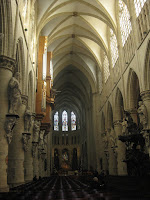 One of the things I enjoyed that day was going to the Cathedral of St. Michel and St. Gudula. The history of the church extends back for 12 centuries. In the 9th century A.D. there was a chapel dedicated to St. Michael. In the 11th century there was a Romanesque style church built there are after relics of St. Gudula were moved there, it became the collegial church of St. Michel and St. Gudula. In 1226, the present church was build in Gothic "Barabancon" style. In 1962 it was promoted to cathedral status. 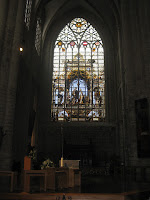 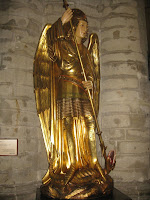 The stained glass and confessionals date back to the 16th century;  the pulpit was carved by H.F. Verbruggen in 1699 and intricately depicts the fall of Adam and Eve and the Redemption. The church also contains the mausoleums of the Dukes of Brabant and Archduke Ernest of Austria. You can go down under the church to see the remains of the older parts of the building. 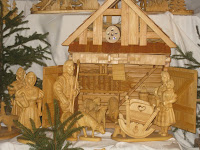 When we visited the grass along the walkways was dotted with yellow nodding daffodils (December 28) while inside the church were displays of Nativity scenes from different countries and communities. One of my favourites was from Slovakia; I think it was made in a prison and was completely made of intricately carved wood. 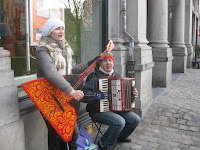 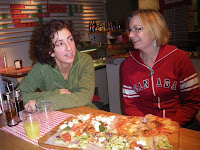 Street busking on the left, dinner with our friend Charli Aron at Mamma Roma's pizza.
Posted by Debbie at 14:25