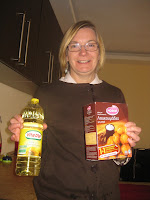 The Greek version of the doughnut is called Loukoumades (Pronounced - Loukouma-thees). We have had these several times as they often come complimentary at the end of a Greek meal. We found several recipes for them but since we were rather limited on baking implements, we decided to make a first try making them from a mix. Fairly easy but a little messy - you just mix the flour mix, with the yeast packet, add lukewarm water and allow to rise. 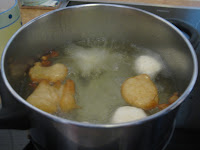 Then comes the technical part - you need to squeeze the dough out of your fist onto a spoon and then drop into hot oil and cook until golden on both sides. Some of the recipes call for a thick syrup with a lot of sugar and honey, but we just drizzled ours with a little bit of honey, a shake of cinnamon and vanilla ice cream. Jacob proclaimed them as good as the ones we had at the restaurant.  Next time I think I will try the recipe at this link:   http://allrecipes.com/recipe/loukoumades/ 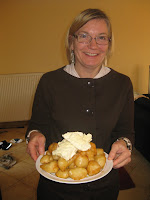 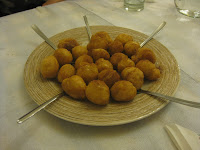 Bon appetit or "kali orexi" as the Greeks would say.
Posted by Debbie at 08:47