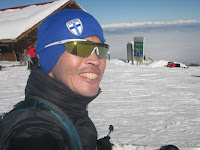 Just got back from Bulgaria and, if there's one thing I've learned, the GPS is no bloody substitute for checking out a map beforehand! Our drive from the Bulgarian border to Bansko was a total nightmare. Right from the border, the GPS took us off to the right and through a few ancient villages that might not have changed since medieval times, except for the "modern" update of a lot of Ladas parked in the driveway! 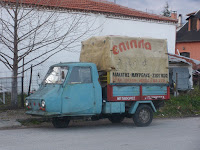 The road, to use my buddy Olaf's vernacular, can only euphemistically called "high quality paved roads" in the most theoretical sense of being paved. 20 km of this and then we proceeded to drive up this switchbacked mountain pass in the dark. On the good, the GPS maps are so detailed that it even had this dirt path taking you up an even steeper set of switchbacks in between bigger switchbacks. On the negative side of the ledger, it actually tried to lead us up it! Eventually, partway up the mountain, we stopped because of a herd of horses grazing by the side of the road. 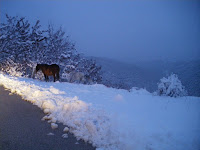 Then pretty soon after that, the snow was bad enough that it required Debbie and me trying to figure out how to put unfamiliar chains onto the car in the middle of climbing the mountain in the darkness by flashlight - wasn't that a treat! I practiced putting the chains on back home in Trikala in the morning, but it was still >60 min in the cold and lightly falling snow before we figured it out again in real life! It was so quiet there in the deep mountain that I was half-expecting Jack Nicholson's crazed "The Shining" character to be calling. 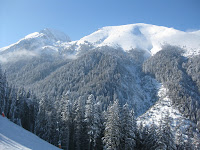 Things were fun going up and then down the switchbacked pass, then having to take them off at the bottom of the pass. Getting to the driveway of the apartment in Bansko, we then had to put them back on and then off again just for more fun. End result was that the 90 km or so from the Border to Bansko took nearly 4 h to complete!

Just fun and games so far, right? So coming back, we follow Andreas back to the border and realized that our GPS had completely ignored the major highway route that featured minimal elevation and was ludicrously simpler, safer, and MUCH more direct to drive! No wonder people get stranded in the middle of the mountains in Nevada when they blindly trust their stupid GPS!


Related to that, Ken just pointed out a recent NY Times article all about how reliance on GPS erodes our cognitive abilities...
Posted by Unknown at 13:03