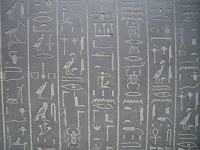 By Jacob, Zachary and Debbie


One of the great things about London is that a lot of the museums are free. Jacob says the British Museum is one of his favorites. We went there twice and still only saw a small portion of it. 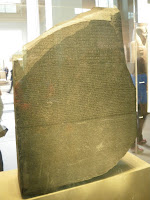 Rosetta Stone
One of the greatest treasures of the Museum is the Rosetta Stone. The Rosetta Stone is a rock with 3 types of writing that provided the key to deciphering Egyptian hieroglyphics It was found by French soldiers in 1799 at Fort St. Julien, el Rashid (Rosetta) Egypt on the western Nile Delta. It is a grey granite rock weighing 760kg. It is incomplete and was thought to be about 50 cm taller. There are 53 lines of Greek script, 32 lines of cursive demotic Egyptian script and 14 lines of ancient hieroglyphics. By comparing the known Greek with the others, it was possible to decipher the hieroglyphics. The inscription on the Rosetta Stone is a decree written in 196 B.C. on the first anniversary of the coronation of Ptolomy V who became ruler when he was 13 years old.


We bought a 800 piece puzzle of the Rosetta Stone and Mom thinks it is the hardest puzzle we have ever done. At least as hard as deciphering the actual Rosetta Stone itself. 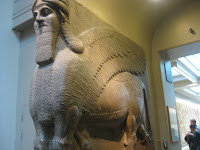 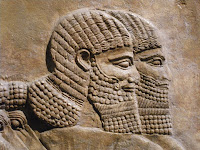 Assyria
There was a large collection of Assyrian gates, carvings. There was a sculpture of the head of Sargon the Great and carved reliefs of the battles of Ashurpanipal. 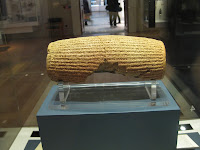 Cyrus Cylinder
Another very interesting thing we saw was the Cyrus Cylinder. This is a clay cylinder with an account of the conquest of Babylon by Cyrus the Great of Persia in 539 B.C. It was written in Babylonian script and was designed to be buried in the city walls of Babylon.  It has records of the kings of Babylon and then part in Cyrus' own words starting "I, Cyrus, king of the world..." Cyrus is the king talked about in Isaiah who released the Israelite people from their 70 years of captivity and allowed them to go back to Jerusalem and rebuild their temple and walls there. 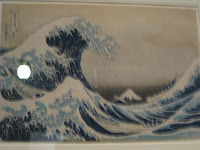 Hokusai Wave
There was also an exhibit about Hokusai's print "The Great Wave", also called Under the Wave, off Kanagawa. This was a colour wood block print by Katsushika Hokusai in 1831 and is unarguably the most famous Japanese print of all. It shows Mount Fuji in the background and a great storm wave towering over 3 fishing boats in the foreground. 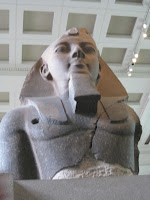 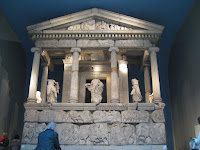 The British Museum is so huge and comprehensive because the British Empire was so good at grabbing and taking things from places throughout the world - the ultimate sticky-fingered discount! And it wasn't even just little small stuff they'd sneak in their pockets. We're talking massive Egyptian statues and whole Greek temples! Imagine paying the shipping on this stuff! 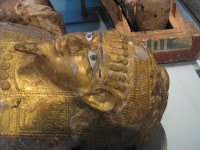 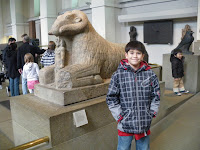 It wouldn't be the British without lots and lots of mummies. No King Tut though. The mummies are the second most popular thing at the British after the Rosetta Stone. Luckily, it was a Sunday and the crowds weren't too overwhelming. 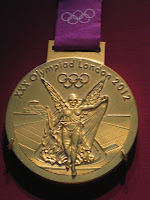 The British also had an exhibit 'from metal to medal' about the creation of the London Olympic medals, from mining the ore through to design and casting. Hey, the medals are designed by an artist named Lin CHEUNG!