Waterloo - I was defeated you won the war! 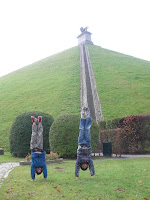 Today we went to the spot where the battle of Waterloo was fought. Wellington, and Blucher, who where the English, and Prussian marshals, Against Napoleon from France. The battle was on June 18, 1815, with 120,000 French and 240,000 Allied troops! Over 11,000 died that day with 50-70,000 wounded and another 3-5,000 dying from wounds over the next days. The French were routed and this ended Napoleon's reign. He went to exile in St. Helena and died in 1821 there.

Waterloo is about 15 km south of where we live in Brussels. Here is another handstand shot in front of the Lion. 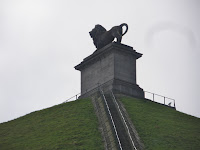 To commemorate where Prince Guillaume of Orange was wounded, there was a HUGE cone mound (40.5 meters high, and 226 stairs to climb it) on the top was a Big lion cast out of all the discarded cannon balls. With our pass we could go to 2 films, climb the mound, a panorama, a wax museum, Wellingtons Headquarters, and Napoleons headquarters. but we didn't get to Napoleons headquarters. 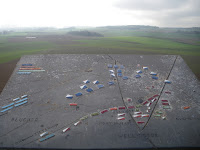 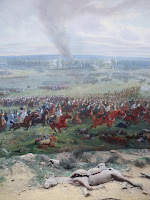 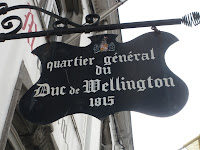 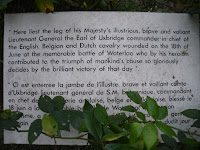 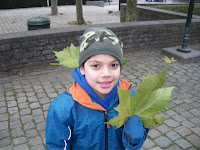 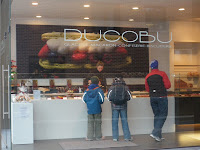 In the picture on your left I am showing how big those Leaves are. And on the right we are looking at a fancy bakery before going home. It's one of two Belgian bakeries/chocolateries selected for the Shanghai Expo in 2010!