One of the places that was closed on Wednesdays was Peter and Paul Fortress. The grounds were open but the cathedral and the museums that were in the fortress were all closed. The fortress was founded in 1703 as a core structure in Peter the Great's new capital it takes up almost all the space on an island called Zayachy Ostrov, the island is opposite the winter palace. The fortress has a lot of buildings worth seeing including the Peter and Paul cathedral at the cathedral are the graves of all but two of the Russian tzars. the tall golden spire is as far away as you can get from the normal Russian union domes on almost all of the other cathedrals in St Petersburg (if not all) and can be seen from far across city. In summer the island becomes a magnet for sunbathers with its pebbly beaches and in winter swimmers who are known as morzhi or Walruses break through the ice and swimming on the south side of the island, you can even see a blue painted walrus symbolizing them on the wall of the fortress. 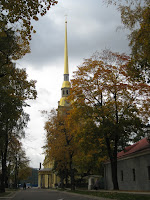 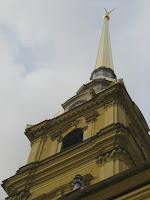 Here are some more pictures of the cathedral at Peter and Paul fortress, you can see from these pictures that it does not have any onion domes! 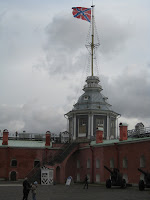 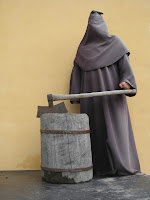 Yikes! tortures of the middle ages! Ok it is just fake. on the left is a picture of part of the fortress.