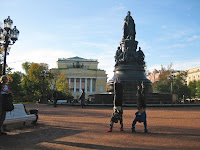 Done with Zachary
Nevsky Prospect is one of the main streets in St. Petersburg, so let's take a walk on a beautiful Wednesday since everything in the city is closed! There are at least 6 cathedrals on Nevsky Prospect. One is called the Armenian cathedral and another is called the Kazan cathedral. On Nevsky prospect we found a Lego store. It was very small but  everything was close together so there was a lot of Lego. They had lots of different sets and they had some Lego games. On Nevsky Prospect there are also a lot of restaurants and shops. We walked down this street the day we got to St. petersburg and it was dark and rainy and we were all tired. Also on Nevsky Prospect is an 18th century shopping mall and it is a kilometer deep. It is called Gostiny Dvor and started out as a place where tradesmen lived and worked. There is also a Monument to Catherine the Great and it is beside the Russian National Library. Across from the Catherine the Great monument is the Stragonoff Palace. Behind the yellow building is the huge Alexander Theatre. 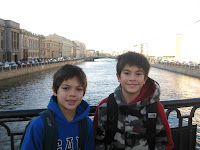 The Bridge across the Fontanka River is called the Anichkov Bridge. It has 4 horse statues named the Horse Tamers, designed by Pyotr Klodt and an intricate iron railing. 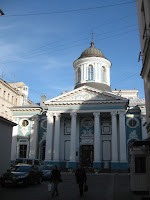 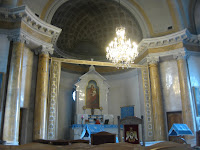 It is said that the Armenian Cathedral was paid for by the sale of one diamond by Catherine the Great. That must be one big rock! 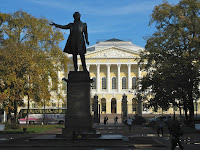 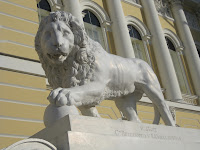 This is a statue of the famous poet Alexander Pushkin, who died in a pistol duel. He's in front of the massive Russian Museum, which is guarded by these tough-looking lion statues. 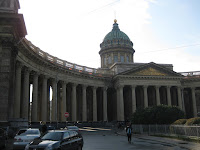 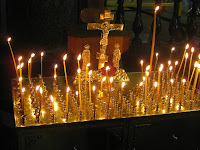 The Kazan Cathedral took 10 years to build; it took from 1801 till 1811. It is a Russian Orthodox church and was modeled after St. Peter Basilica in Rome. It also has approximately 90 columns outside.