Lest We Forget - Brussels 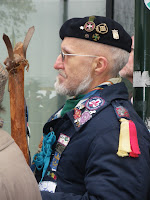 We spent Remembrance Day in Brussels, about 150 km away from the town of Ypres and the heart of "In Flanders Field." For me, the Remembrance ceremony was surprisingly small and sparsely attended for a nation which was the epicentre of the First World War and suffered so much in the Second World War also. Honestly, the ones we attended in Halifax had bigger ceremonies and crowds, which I truly find astonishing.
That's not to say the war and military service has been forgotten completely here, as seen by this gentleman standing next to me in the peanut gallery. 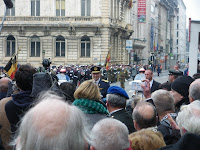 King Albert II of Belgium was there to lay wreathes at the ceremony, which meant the square near the cenotaph was pretty much completely closed off from view by the public. I caught this picture of him in the military uniform in the middle as he was getting into his car. I guess I shouldn't really complain - if this was in London with the Queen we wouldn't get within a country mile of the ceremony. 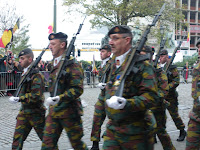 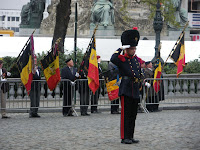 A band played throughout the ceremony and the wreath-laying, along with a few troops marching by. 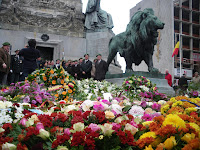 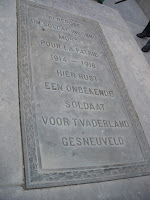 At the cenotaph. A view on the left from ground level, with the wreathes in the foreground and the lions, a military reunion, and the eternal flame in the background. At the base of the flame lies the tomb of the unknown soldier.